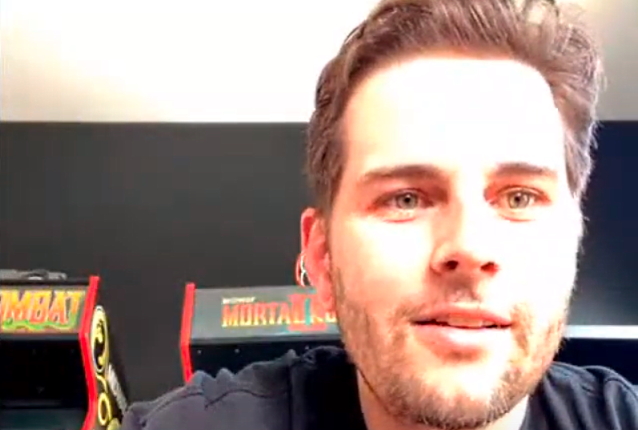 M. Shadows has explained AVENGED SEVENFOLD's recently launched #IncentivizedQuarantine initiative in which he and his bandmates will send fans free merchandise for proving that they're isolating themselves and doing their part to stop the spread of COVID-19 for seven days straight.

"We wanted to do something, but we didn't want any agenda in it for us," the singer told Zippo Encore's Jose Mangin during a livestreamed chat on Thursday (April 30). "So we said, 'Okay. If we get people to stay home for seven days…' This company Warren Lotas, they were doing it first, and we were in contact with those guys, and they were, like, 'Hey, we're gonna do a thing, where if people go online and can prove they are at home for seven days in a row, then we're gonna send them free stuff.' And we were, like, 'Okay. That would be cool.' We felt it would be important, instead of coming out with a statement, [to let everyone know] that we were taking this seriously. 'Cause I know a lot of people believe in conspiracy theories, that they wanna believe that this isn't a big deal or this and that, but we wanted to have our own way of letting people know that we're taking it seriously and we hope you do too.

"Our shop got shut down, so we're sending the stuff out now, but we had about three thousand people that checked in seven days in a row," he continued. "We didn't wanna make any money off it. We're paying for all the shipping, we paid for all the merchandise, we paid for all the people to do it, and so we're gonna send them something cool. And it's gonna start this week, once the shop starts coming back online and we're able to get some people in there."

AVENGED SEVENFOLD kept a low profile during 2019 and will likely not return to the road until next year. A blood blister on M. Shadows's vocal cords forced the band to cancel a summer 2018 tour with PROPHETS OF RAGE and THREE DAYS GRACE.

Earlier this year, AVENGED SEVENFOLD's platinum-certified DVD/CD "Live In The LBC & Diamonds In The Rough" was released digitally for the very first time via Warner Records. "Diamonds In The Rough", originally issued in 2008 as a compilation CD that included B-sides recorded during the making of the band's self-titled debut, was made available on February 7, while "Live In The LBC", originally released as a live DVD from the band's 2008 show at Long Beach Arena, came out on March 6.

AVENGED SEVENFOLD's latest album, "The Stage", was surprise-released in October 2016.