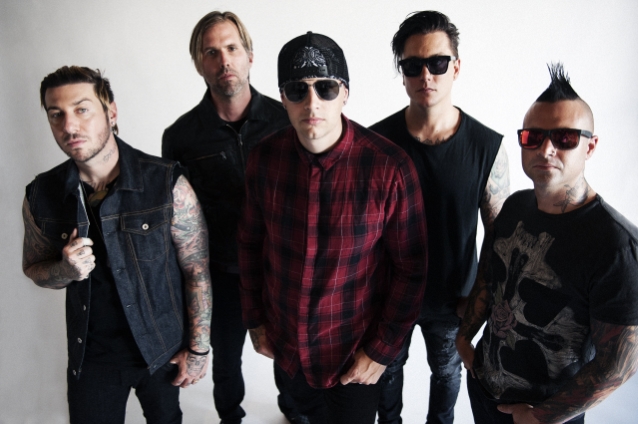 According to Kerrang!, AVENGED SEVENFOLD will release a new EP containing all four songs the band has written and recorded for the "Call Of Duty: Black Ops" franchise.

Frontman M. Shadows told the U.K. magazine about the decision to make the tracks available on a separate EP: "We just felt these songs needed a place to live, instead of being scattered all over streaming services. We will also be releasing 'Jade Helm', which is the multiplayer score we did for 'Black Ops 3'. Until now, that has only been available on YouTube and in the game."

The EP will include a new AVENGED SEVENFOLD song which was recently teased in a leaked trailer for the "Call Of Duty: Black Ops 4" video game. M. Shadows stated about the track: "The song is dark and brooding. We wanted to capture a difference feeling than a straight-ahead 'zombie killer' track. These songs are good places for us to experiment with our sound. I would put this in the category of 'dark alternative.'"

Asked how the new song came about and whether it was written with "Call Of Duty" in mind or if it was a leftover cut from "The Stage" sessions, M. Shadows said: "I did a Twitter takeover where a fan asked me about doing music for 'Black Ops 3'. The team at [games developing company] Treyarch saw it and asked us to participate. I went into the studio and saw what they were working on. We only had a month to get them a finished product, because of our European tour. We wrote what we felt would be a departure for not only us, but Treyarch as well."

A video "using game footage" will be released "to present the song," according to the singer, with more details to be revealed soon.

AVENGED SEVENFOLD bassist Johnny Christ previously told HardDrive Radio about the band's new track: "It's a fun song — it's a little bit of a departure from I think what our fans would expect, but I guess that also makes sense because they expect crazy from us now."

AVENGED SEVENFOLD contributed music to the previous three installments of the game series, and even appears (virtually) in the second chapter, when they can be seen performing the song "Carry On" in an epilogue after the closing credits.

The "Call Of Duty" song will be the first original material AVENGED SEVENFOLD has released since last year's "Dose", which originally surfaced in the Gameloft mobile game "Dungeon Hunter 5". It later appeared on the "deluxe edition" 2017 reissue of the group's 2016 studio album, "The Stage".

AVENGED SEVENFOLD will probably start working on its eighth studio LP this fall for a 2019 release.

The band recently canceled its summer tour with PROPHETS OF RAGE and THREE DAYS GRACE after M. Shadows was struck by a viral infection that left him "voiceless."