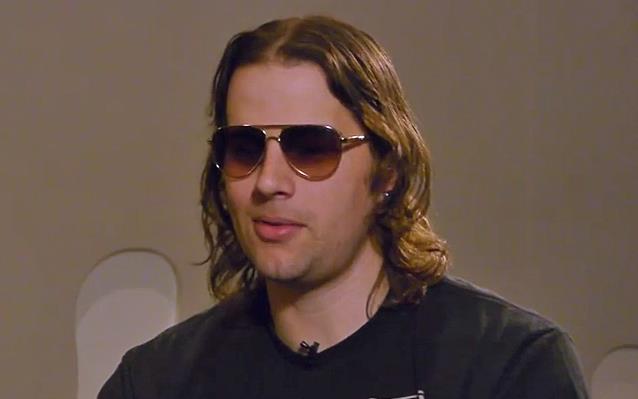 AVENGED SEVENFOLD singer M. Shadows was interviewed on the latest, hour-long episode of "Talk Is Jericho", the recently launched podcast of Chris Jericho, the world champion pro wrestler, actor, New York Times best-selling author and lead vocalist of the metal band FOZZY. You can now listen to the podcast at PodcastOne.com.

"Talk Is Jericho" premiered last month on PodcastOne, the leader in audio on-demand programing and a division of Courtside Entertainment Group.

AVENGED SEVENFOLD has released the animated series based around the band's sixth and latest album, "Hail To The King". The six-episode series is available on Machimina's HappyHour channel on YouTube and also serves as a prologue and back story for the group's mobile game, "Hail To The King: Deathbat", which will debut later in the year.

M. Shadows told The Pulse Of Radio that Machimina first came to the band with the idea of doing an animated series. "They came to us and said, 'Well, do you guys want to do a series?'" he said. "And we didn't really have much interest, to be honest, 'cause we didn't really see the tie-in. But then, you know, they found out we were doing a game and said, 'Well, why don't we kind of tell the story before the game happens?' Sometimes it's hard to tell a whole back story in the beginning of a mobile game. It's just something for fans to watch. You know, it's 15 minutes long, just a thing to sit back and eat some popcorn and watch a series. It's just kind of all in good fun."

The series was directed by Jon Schnepp, producer of the Adult Swim animated show "Metalocalypse".

Both the series and game tell the story of AVENGED SEVENFOLD's fictional mascot, the Deathbat.

"Hail To The King" came out last year and was the second straight AVENGED SEVENFOLD album to debut at No. 1 on the Billboard chart, following 2010's "Nightmare".