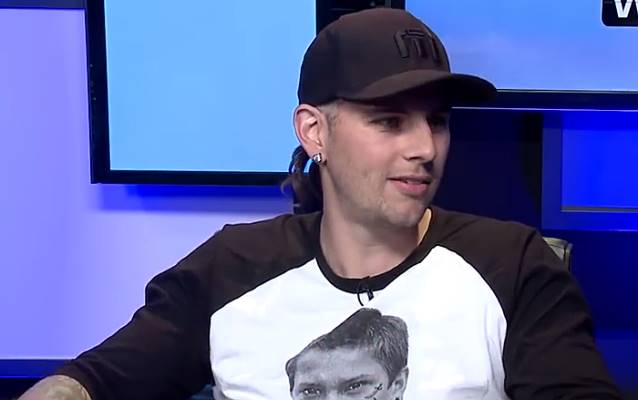 AVENGED SEVENFOLD frontman M. Shadows was a recent guest on IGN's "Up At Noon", the comedy-driven talk show starring the sometimes controversial but always opinionated Greg Miller. You can now watch video footage of the singer's appearance below.

AVENGED SEVENFOLD's mobile video game, Hail To The King: Deathbat, has been two years in the making and M. Shadows told The Pulse Of Radio where things are at. "It's gonna be a big game," he said. "It's really pushing the boundaries of mobile in a lot of technical ways. Right now we're just working out the bugs. You know, there's some people sitting in a dark room somewhere just playing the game over and over and sending us notes on it. So that's kind of where it stands."

Hail To The King: Deathbat will debut later in the year. Shadows said about it, "We wanted to bring the story of the Deathbat to life and allow you to control its destiny. While the game stands on its own in terms of the story and game play, we still wanted to add in some extras for our fans."