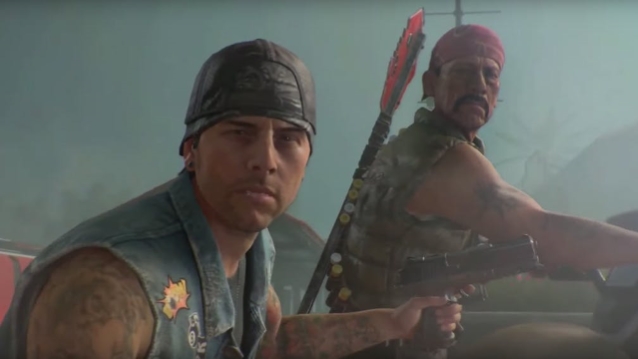 AVENGED SEVENFOLD frontman M. Shadows is getting his very own playable character in the "Call Of Duty: Black Ops" franchise.

The singer is featured in a new trailer for "Call of Duty: Black Ops 4"'s next content drop called "Operation Apocalypse Z", which was released on Monday via Activision and Treyarch.

During a Treyarch livestream, M. Shadows said that getting his own character in the franchise was a "career highlight."

In the newly released trailer, M. Shadows is seen at the 2:34 point when he and other Zombies survivors look out a window at an incoming horde.

"'Operation Apocalypse Z' unleashes the hordes of undead in all game modes," an announcement said. "Fans will find exciting new ways to play, including Multiplayer maps and modes that channel the Zombies legacy, a new Zombies experience, eerie changes throughout the Blackout map, and more new weapons for players to unlock and master."

"Operation Apocalypse Z" will be made avaialble first for the PlayStation 4 on July 9 and will come to other platforms later.

"Mad Hatter" was the first original material AVENGED SEVENFOLD has released since 2017's "Dose", which originally surfaced in the Gameloft mobile game "Dungeon Hunter 5". It later appeared on the "deluxe edition" 2017 reissue of the group's 2016 studio album "The Stage".