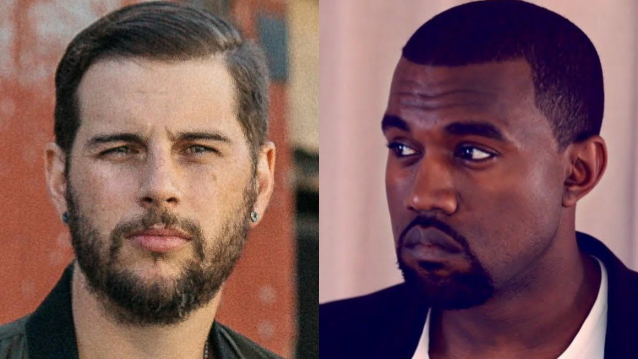 AVENGED SEVENFOLD frontman M. Shadows has confirmed to Metal Hammer that the band will complete the recording of its eighth studio album next month. "In January, we're going in to finish the strings on the record," he said. "The record's been recorded for a year, but we haven't been able to put the real strings on it, because we couldn't fly out to Prague. When an orchestra have to social distance and they aren't sitting next to each other, they can get out of tune, and we have just finally got to a place where we can use this 70-piece orchestra as we intended. We finish the record in February, mix it in March."

Regarding the musical direction of the follow-up to 2016's "The Stage", M. Shadows said: "There are so many influences… We're very influenced by Kanye West. The thing about Kanye is that he is pulling from such great soul music. I didn't grow up with that stuff — my dad listened to BOSTON and Alice Cooper [and] I didn't get that taste of black music and old soul. So, diving deep into jazz musicians… We're not trying to do a jazz record, but the chord changes and progressions are so eye-opening to us."

Back in February 2021, AVENGED SEVENFOLD guitarist Zacky Vengeance told Detroit's WRIF radio station that he and his bandmates had done "lots and lots of writing — at a lot slower pacer than usual" — during the coronavirus pandemic. "Now that we are a little bit older, we move around a little bit slower, but [we've done] tons of writing," he said. "We've gone to the studio. It was kind of a weird time to do anything in 2020, but that's when we felt like it was a good time to go out there and start tracking all the stuff that we had in us.

"But, like I said, we're doing it at a slow pace, so we're still in the process of recording," he explained. "We're taking it really, really slow, making sure everything is the way we like it. We're not in a big rush to get anything out, mainly 'cause we wanna get on the road, and we wanna be able to bring it to life. We wanna tour, we wanna travel, we wanna play songs that people wanna hear; we wanna expose them to some new stuff. 'Cause I just feel like rushing to put something out right now and letting it dissipate because of the void, while people are worried about where their next meal is coming from or the paycheck, the last thing in the world on people's minds is, 'AVENGED SEVENFOLD's gonna put out a new album, and that's gonna be the saving grace for us all.' And I feel like we'll take it slow, let the world get a little bit back to normal, and when people are ready, we'll know — we have a good sense of that. We'll slowly finish it up, and then unleash it when the world's ready."

In December 2021, M. Shadows told Kerrang! magazine about the musical direction of the new AVENGED material: "The [new] record sounds nothing like 'The Stage' — it's a completely new direction, and it sounds nothing like anything we've done. That's all I'll say about it: it's over the top, and it's very eclectic and wild."

AVENGED SEVENFOLD recently announced the Deathbats Club, a new level of connecting with fans based around non-fungible tokens, or NFTs — digital assets (free tickets for life, free meet-amd-greets for life, airdrops over the course of each year, drum lessons, guitar lessons, golf lessons, giveaways, skip the lines at shows, poker nights, movie nights, etc.) that can't be replicated. After an initial drop of 101 free NFTs to whet fans' appetites, they released 10,000 at the end of November via avengedsevenfold.io, with everyone who buys one becoming part of the community.