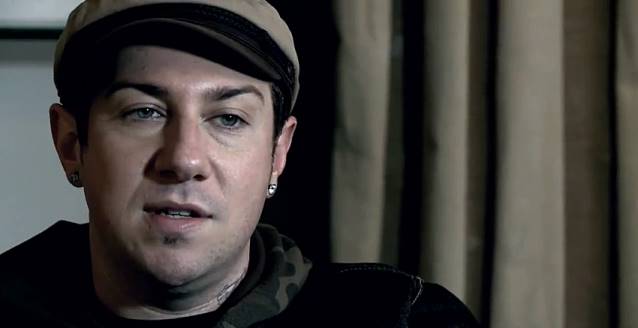 AVENGED SEVENFOLD will reissue its breakthrough second album, "Waking The Fallen", in a new special edition on August 26. The 2003 disc was the first to feature guitarist Synyster Gates and bassist Johnny Christ as full-fledged members, and its last independent release before signing a major deal with Warner Bros. Guitarist Zacky Vengeance told The Pulse Of Radio what the album meant at the time it came out. "It truly encompasses everything that AVENGED SEVENFOLD was," he said. "It was us being fearless, showing our roots in heavy metal, punk rock, rock 'n' roll, and not being afraid to try everything, you know, under the sun when it comes to writing music. It was us showing off our attitude, our theatrics during that time period. We wanted to take it to a different level rather than just keep it in the garage."

"Waking The Fallen: Resurrected" will contain a total of 23 tracks, including 11 never-before-heard songs, new artwork, the original first cut of the music video for "Unholy Confessions" and a 30-minute film featuring the present-day band.

AVENGED SEVENFOLD and KORN co-headlined this year's Rockstar Energy Drink Mayhem Festival, which kicked off its annual run on July 5 in Devore, California and wrapped on August 10 in The Woodlands, Texas.

Other acts on the bill included ASKING ALEXANDRIA, SUICIDE SILENCE, TRIVIUM, MISS MAY I and more.

AVENGED SEVENFOLD's latest album, "Hail To The King", was certified gold on July 16 by the RIAA (Recording Industry Association Of America) for shipments in excess of 500,000 copies. Released last year, it was the band's second straight CD to debut at No. 1 on the Billboard chart, following 2010's "Nightmare".