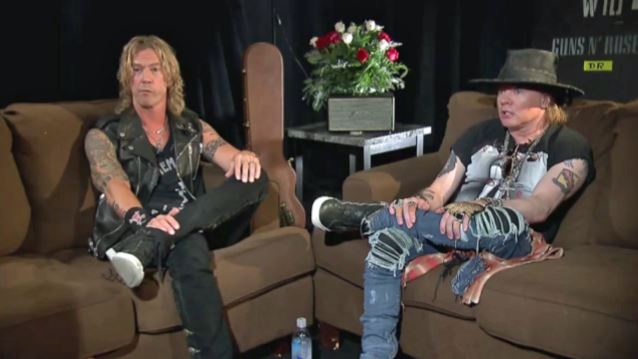 GUNS N' ROSES members Axl Rose and Duff McKagan were interviewed on tonight's (Sunday, September 4) edition of "Fantástico", the Brazilian weekly news magazine which airs on Globo TV. You can now watch the chat at Globo.com. A few excerpts follow (transcribed by BLABBERMOUTH.NET).

On what the driving force was in bringing Axl, Duff and Slash back together after so many years apart:

Axl: "Actually, it had a lot to do with Paul Tollett of [the] Coachella [festival]. He started talking about [booking a reunion of the classic GUNS N' ROSES lineup for his festival]. It seemed real. So at that point, I just told my people that they could go ahead and start talking to people and see what's going on. And then as it became more real, I texted Fernando [Lebeis, who is part of the GUNS N' ROSES management team] and asked for Slash's number. And then Fernando texted his mom [Beta Lebeis, who is also part of the GUNS N' ROSES management team], and he was, like, 'If this is a joke, I'm gonna kill you.'"

On whether they initially thought Coachella was going to be just a one-off reunion gig:

Axl: "No. It started with talking about Coachella, but at the same time that those talks were starting, there were people involved with Coachella — agencies and things — so they were having these conversations about what they could possibly do or not. So it was all being considered."

On whether they thought from the very beginning that this could turn into a more long-term reunion:

Duff: "Getting into rehearsals, it was really just kind of one day at a time. I don't know that I thought too much about how far ahead. It was just really cool to play some of the music with the guys that I was playing it with."

On Axl's first meeting with Slash to discuss a GUNS N' ROSES reunion:

Axl: "Like I said, I had asked for [Slash's] number. And then I had called him and he was on tour or something, and then we set up when we were gonna see each other, and I think something happened to both of our plans and that didn't happen. And then eventually in October, we got together and we had a dinner at my house. And then Duff and I went and hung out right after that — like a week or so after. And then it was just kind of talking and planning. We initially were gonna do some kind of promos and stuff, and then other things came up that got in the way of that. And then it was rehearsals. And I went down to rehearsal, and everything just sounded right. And we just went to work. It was time to sing, see what the sound sounded like and stuff and get ready for the show, and it was all working."

On whether each one of the three of them — Axl, Duff and Slash — had to change a bit for the reunion to be happening right now:

Duff: "I really got to discover, in the best of ways, the album 'Chinese Democracy' that [Axl] made [without the other members of the classic GN'R lineup], and it was these songs he had worked on. And I had listened to the record, but when you start to play the songs as a player, you really discover all the layers in the songs. But really kind of how you hear it and how I'm hearing the songs are maybe a little bit different. And when we went into rehearsals, we wanted to really own… like this is gonna be what we're doing."

Axl: "I didn't have anything, really, to do with that. They stepped to songs on 'Chinese'. They asked, 'Which ones are you interested in us doing?' and stuff, and they stepped to that on their own. They started working with Frank [Ferrer, drums], 'cause they had their own way of working with the drummer, and working with the rhythms, and kind of picked up the tempo on some of the old songs a bit, and things like that, and got their communication working. So they spent a good while with that on their own."

On whether there is any chance classic-era GUNS N' ROSES members Steven Adler and Izzy Stradlin will join the reunion at a later date:

Axl: "Steven did join us [on a couple of dates]. At the same time, I have no idea. When this started, Steven had just had back surgery and stuff, so I don't have any idea about that. And with Izzy, that's just something that… I can't really describe to say… I don't really know what to say about Izzy. It's, like, you could have a conversation and think it's one way and the next day it's another way. And I'm not trying to take any shots at Izzy. It's just his thing is kind of his thing, whatever that is."

On whether Axl is planning to continue singing for AC/DC beyond the North American shows that are currently taking place:

Axl: "I'll do that as long as Angus [Young, AC/DC guitarist] wants to do it and as long as… and we can make it work. GUNS is really supportive about it. I love that it's my job. I love that Angus is my boss. And singing the early Brian [Johnson] songs — the first couple of albums with Brian — those are something else to sing, so it's physically a different animal and another kind of work. And I take pride in doing it. And it's a hard thing in its own way. So after this [GUNS N' ROSES' North American tour], there's a few days [off], and then I'll do another ten shows with AC/DC. And after that, it's kind of, whatever Angus wants to do."