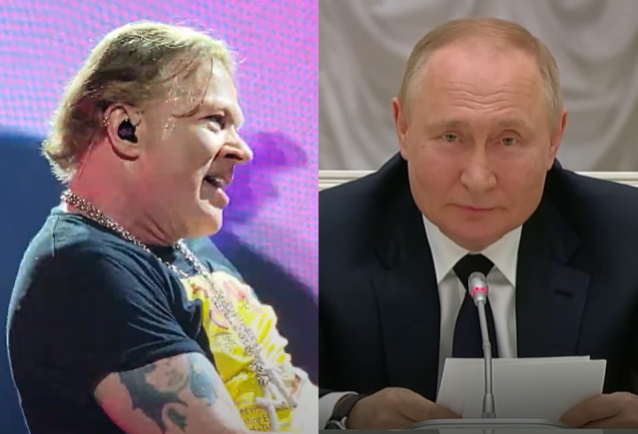 Axl Rose has blasted Russian president Vladimir Putin and dedicated GUNS N' ROSES' just-completed European tour to late FOO FIGHTERS drummer Taylor Hawkins. In a Twitter statement marking the end of the trek, Axl also thanked GN'R's European fans for showing "love and support" to the Ukrainian people, to whom Rose dedicated "Civil War" at the shows. Rose also praised Ukraine's "noble and horrifying fight for freedom" and condemned Putin's government as "an increasingly totalitarian regime ran by a callous, lying, murderous, little man with outdated ambitions and no regard for human life."

Rose wrote: "I'd like to thank everyone that came out to r shows in Europe!! U were AMAZING!! We hope u had fun n' hope to see u again sooner than later!! I also want to thank everyone in London for being so understanding of r challenges and apologize again to r fans in Scotland for having to postpone r performance there. Rescheduling or being forced to cancel rn't things that r done lightly especially with r fans, the size of the endeavor and everyone from the fans, the cities, the venue's, the promoters, the crews n' everyone involved taken very seriously into consideration."

He continued: "I'd like to thank Carrie Underwood and her team for coming all the way to the UK for r shows at Tottingham!! YEAH!!! She's AMAZING!! AND in this case a REAL lifesaver!! At least someone could sing!!

"It's just a simple gesture n' it's awkward dealing with the gravity of something like this but in an effort to pay r respects we'd like to dedicate this tour to our friend Taylor Hawkins. Taylor was a really great guy and it was always great to see him! He was a great n' always welcome part of touring these last few years! This is such a horrible thing and r hearts go out to his family, friends, band mates and everyone who love him.

"I'd also like to thank everyone for showing such love and support during the tour for the people of Ukraine and their noble and horrifying fight for freedom against an increasingly totalitarian regime ran by a callous, lying, murderous, little man with outdated ambitions and no regard for human life.

"Looking forward to seeing everyone in South America!! See you SOON!!!"

Some of the GUNS N' ROSES fans who attended the band's two concerts at the Tottenham Hotspur Stadium in London earlier in the month complained about doors opening two hours late and various sound problems during the GN'R performances, making it difficult for the people in the back of the venue to hear Axl's vocals. At the second concert on July 2, Rose told the crowd he was "having issues" with his voice, forcing GUNS N' ROSES to play a truncated 19-song set, omitting such concert staples as "November Rain", which has been performed at every GN'R show since 2016.

GUNS N' ROSES' European tour wrapped on July 15 in Hanover, Germany. The band will pick up again in September in South America.