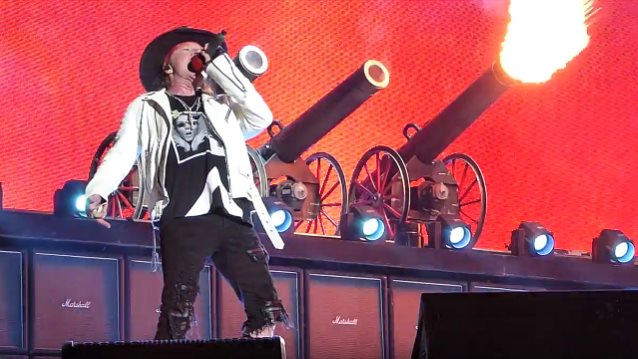 According to The Pulse Of Radio, a longtime key member of GUNS N' ROSES' management team, Beta Lebeis, posted a message on Instagram in which she responded to fans critical of GUNS singer Axl Rose doing double duty as the current touring frontman for AC/DC. Lebeis wrote: "Do them a favor, don't come or watch any shows. They don't need assholes like you around. You are an illness to both bands."

Lebeis said later in a second post: "I'm sure all of you wish Brian [Johnson, AC/DC singer] would be there, but Brian is sick and for God's sake, just appreciate what's up there and stop being so selfish. Grow up and stop complaining. This is also about Angus [Young] and his mates, have some respect for them. Brian chose to leave due to health issues and Axl is helping his idol. I guess haters will always be haters and have nothing better to do than shit on other people."

Axl Rose was recruited to sing for AC/DC on a series of European gigs and a current run of ten North American shows after severe hearing problems forced Johnson to stop performing live.

Rose's performances with AC/DC have been widely acclaimed by fans and the press.

Angus Young, the band's sole original member and leader, has said he's not sure what the future holds for AC/DC beyond the current tour. The group has gone through extensive lineup changes in the past two years due to illness and legal issues.

Rose will return to GUNS N' ROSES for a South American tour this fall.