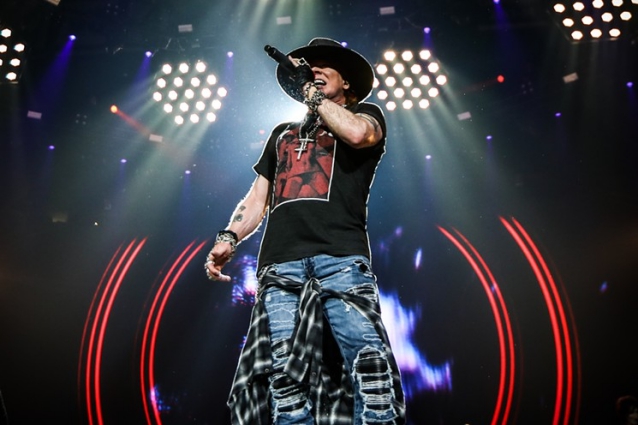 The official video for "Rock The Rock", the first new song from GUNS N' ROSES singer Axl Rose in 10 years, can be seen below. The track is featured in the TV show "New Looney Tunes", which airs on the Boomerang streaming service.

The episode, which premiered on December 24, features Axl as a character. In the clip called "Armageddon Outta Here, Part Two", Rose asks Bugs Bunny, Porky Pig and company how to get to the Civic Center, where he is scheduled to perform that night with his band STEEL UNDERPANTS. After the "Looney Tunes" characters tell Axl there is a giant asteroid heading towards earth, he informs them his new speakers can "shake mountains to the ground." Bugs then proposes that Rose play loud enough to destroy the asteroid before it can land, with the "Looney Tunes" gang serving as his backing band. The group then proceeds to play a song called "Rock The Rock", ultimately blowing up the asteroid and saving the world.

"Rock The Rock" is the first new recording from Rose since GUNS N' ROSES' latest studio album, "Chinese Democracy", which came out in 2008 and featured only Axl from the classic lineup. However, it appears that Axl did not contribute to the songwriting of "Rock The Rock". The song is registered on BMI as having been written by Joshua Funk and Rob Janas. Funk is an Emmy-nominated composer who has written music for Comedy Central's "Key & Peele", "Wabbit", "The New Looney Tunes", "Scooby Doo: Shaggy's Showdown", "Teachers" and NBC's "Red Nose Day".

Rose is known to be a fan of "Looney Tunes" — GUNS N' ROSES has used the original show's iconic theme song as intro music during its "Not In This Lifetime" reunion tour.

The last album on which Rose, McKagan and Slash appeared together was 1993's covers set "The Spaghetti Incident?"