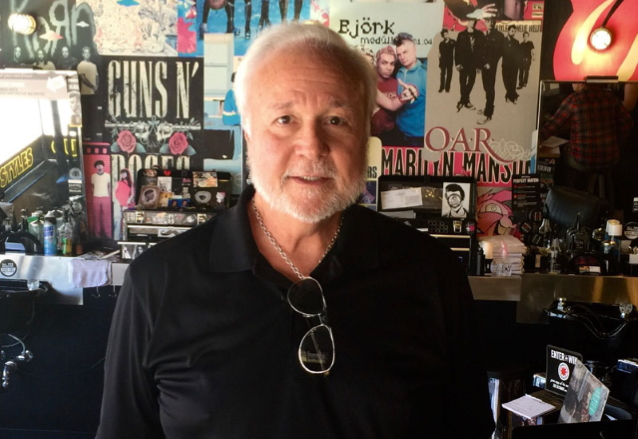 Axl Rose (GUNS N' ROSES),Tom Keifer (CINDERELLA),Matt Heafy (TRIVIUM) and Myles Kennedy (ALTER BRIDGE) are among the musicians who have paid tribute to vocal coach Ron Anderson who died on Sunday (December 19) at the age of 75. No cause of death has been revealed.

Anderson, one of the world's most accomplished and in-demand vocal coaches, has helped many of the music's biggest stars to achieve extraordinary range and exquisite control. Over the past 40 years, he has worked with major artists from across all genres. Pop royalty like Ariana Grande, Gwen Stefani to R&B legends such as Mary J. Blige and Alicia Keys were among his students. He also worked with rock and roll icons like Ozzy Osbourne and Rose.

Axl took to his Twitter on Monday (December 20) to share the following statement: "Very sad to learn of the passing of my friend and vocal coach Ron Anderson. I knew Ron for 35 years. He was always there when I needed him. To say Ron really knew his craft is a huge understatement.

"Thanks Ron for always having the right answer when it was needed most! You're already missed!" he continued. "However good God's choir might be, I know you'll make it a hell of a lot better!!!"

Keifer also paid tribute to Anderson on Twitter, writing: "I'm saddened to hear that my vocal coach and friend Ron Anderson has passed. Sometimes life brings just the right person to you when you need it most. Ron literally re-taught me how to sing at a time I didn't think I would ever be able to sing again. There are really no words that could possibly begin to thank him for how he changed my life. I know there are many other singers who feel the same way. He was an inspirational teacher and a wonderful human being. Condolences to his family and friends. RIP Ron Anderson".

Heafy wrote on Instagram: "Rest In Peace to Ron Anderson - a man who saved my career and life.

"My heart and condolences go out to Pipe and Ron's entire family - especially every artist he's ever trained (and likely saved).

"In 2014, I blew my voice out and had to cancel the rest of a tour - sending crew and band home; fans without shows. I got a text from Matt from [AVENGED SEVENFOLD] saying 'I heard what happened. How can I help?' I asked Matt what he did when this happened to him - he connected me instantly with Ron.

"Ron is one of the most caring, sweet, genuine, talented, knowledgeable people I've had had the privilege of learning from. It was an honor when he asked if I'd help demo his amazing app, site, and method.

Kennedy wrote: "Ron Anderson was the musical equivalent of a Jedi Master. He had the ability to unlock a singer's potential with his incredible wealth of knowledge about the human voice which ultimately allowed his students to express themselves through the power of music. I will be forever grateful for his mentoring and friendship over the last 25 years. A wonderful human and teacher who's big voice and infinite wisdom had a profound effect on so many of us. Rest In Peace my friend."

Anderson's career began over 50 years ago as an opera singer. Ron was a baritone but soon transitioned to a demanding tenor role, and then he performed in some of the most renowned opera houses across Europe and North America. Ron initially studied under the world's finest voice teachers, including Dr. Fritz Zweig, Raimund Herincx and Benvenuto Finelli.

Utilizing his intimate knowledge of the body and vocal cords, Ron began training top performers in the mid-1970s in cities including Los Angeles, Nashville, Miami, New York, London, and Moscow. Known for delivering astoundingly fast yet sustainable results, Anderson also established himself as a leading vocal producer, with countless artists calling on him for help in reaching peak performance during the recording process. With many Grammy Award-winning and platinum-selling albums under his belt, he had also become a go-to vocal coach for the film and TV industry, working with such A-list actors as Tom Cruise, Demi Moore, Brad Pitt and Anne Hathaway in preparing for roles involving singing.

Anderson had also devoted a great deal of time to touring with artists, accompanying his students on the road to provide regular vocal tune-ups and hands-on instruction in properly protecting the voice.

- RIP Ron Anderson -This guy completely changed my life. He taught me the difference. I learned so much from him. I continue to uncover things all the times from our lessons. It just keeps going. I’m so grateful. pic.twitter.com/CQUT0RUy5O