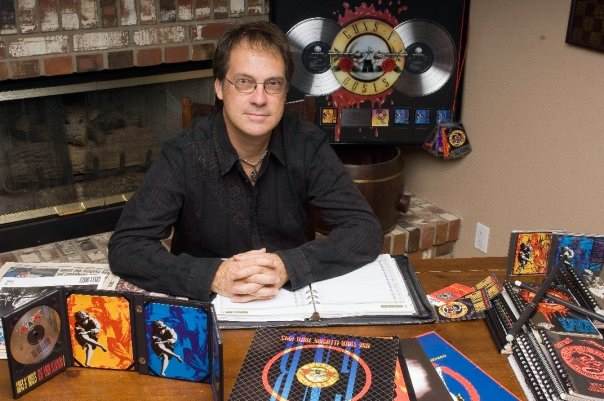 According to The Pulse Of Radio, a former personal manager for GUNS N' ROSES singer Axl Rose believes that a reunion of the band's classic lineup could happen — possibly as soon as two years from now. Craig Duswalt (pictured),who was Rose's personal handler on the 1991-1993 "Use Your Illusion" tour, told ABC News that bassist Duff McKagan's recent appearances with the band on a South American tour and a show in Las Vegas could be the catalyst that sets a full reunion in motion.

Duswalt explained, "Duff is paving the way to open the gates again. Axl and Duff are really getting along well at the concerts, so there's an opening."

Duswalt admitted, however, that the most fractured relationship is the one between Rose and guitarist Slash.

He revealed, "About five years ago, Slash went to Axl's house one day, and Axl didn't want to see him. We [had] thought for a while yes [a reunion could happen], but then it just got ugly again and we thought, 'There's no way.'"

Duswalt added that Rose and Slash "hate each other right now. It's bad… but Slash and him were so close. We all have a feeling it will happen. It's gonna happen in the next two years — there's an opening because of Duff playing with Axl."

The sole remaining original member of GUNS N' ROSES, Rose seemed to rule out any possibility of working with Slash again in a 2009 interview with Billboard. "What's clear is that one of the two of us will die before a reunion and however sad, ugly or unfortunate anyone views it, it is how it is," he said.

Although Duswalt does not mention the specific incident that caused Slash and Axl to despise each other, he claims that musical differences and the direction of the band played a part.

Slash told The Pulse Of Radio a while back how his relationship with Rose disintegrated during the final years of the original GUNS lineup. "His sort of m.o., as far as the band was concerned, over time got so exaggerated in the rock star sense or whatever and he became such a dictator and this and that and the other, that it was impossible for me to work with him, because I'm not the kind of person that takes orders, you know," he said

The current version of GUNS N' ROSES is finishing up a residency in Vegas, and has not recorded anything new since 2008's "Chinese Democracy".

Slash will issue his third solo outing, "World On Fire", this September.

Duswalt has just published a memoir titled "Welcome To My Jungle".