Japanese pop-metal band BABYMETAL will stream its two-day gig which took place on September 19-20, 2016 at Tokyo Dome on its official YouTube channel this weekend. They are calling for fans to "MOSH'SH at home!" BABYMETAL is encouraging fans to stay home and keep their metal spirit.

BABYMETAL's two streams will be airing on April 10 and April 11 at 8 p.m. JST (12 p.m. BST),with the first night showing BABYMETAL's "Red Night" performance from the 2016 Tokyo Dome show and the second stream showing "Black Night." "Red Night" and "Black Night" each have a different setlist.

After the first streaming, the shows will be available on BABYMETAL's official YouTube channel for the next 23 hours, until 7 p.m. JST (11 a.m. BST) of the following day.

BABYMETAL's new DVD and Blu-ray, "Live At The Forum", will be released on May 13. The effort was filmed at the Japanese pop-metal band's October 2019 first-ever arena concert in the U.S. at the The Forum in Los Angeles.

The album includes five songs that feature guest appearances from worldwide musicians who were perfect to the character of each song. Vocalist Joakim Brodén from SABATON is featured on "Oh! Majinai". Guitarist Tim Henson and Scott LePage from POLYPHIA are featured on "Brand New Day". Vocalist Alissa White-Gluz from ARCH ENEMY is featured on "Distortion". Rapper F.Hero is featured in "Pa Pa Ya!!" The guest musicians add more colors to the odyssey of the metal galaxy. 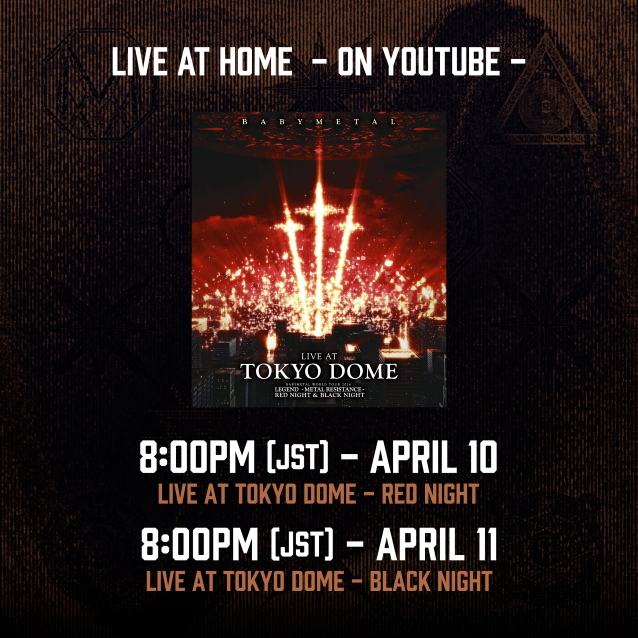