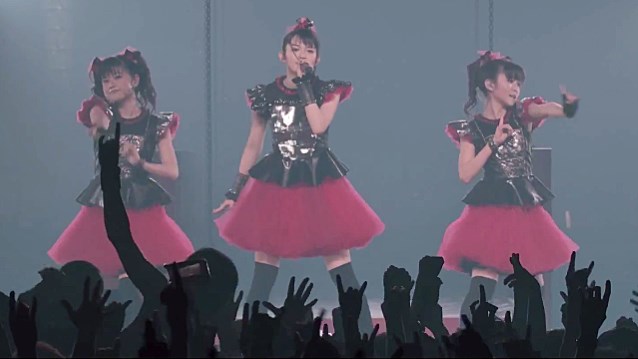 The official performance video for "Road Of Resistance" (formerly referred to as "The One"), a brand new song from the Japanese pop-metal group BABYMETAL, can be seen below. The track, which was debuted during BABYMETAL's November 8, 2014 concert at the Brixton O2 Academy in London, England, is a collaboration between BABYMETAL's production team and guitarists Herman Li and Sam Totman of British epic power metallers DRAGONFORCE, whose guitar playing can be heard in the studio version of the song.

As previously reported, BABYMETAL has signed with RAL/Sony Music Entertainment for the U.S. release of the band's 2014 critically acclaimed self-titled debut album. The CD will feature two bonus tracks and be available digitally on Tuesday, May 12 and physically on Tuesday, June 16.

The band will gear up for an equally busy 2015 when they kick off their "The Dark Knights Begin" world tour on May 9 in Mexico City. U.S. tour dates included a special one-off headlining show on May 14 at House Of Blues in Chicago, Illinois, followed by a festival appearance on May 16 at Rock On The Range in Columbus, Ohio.