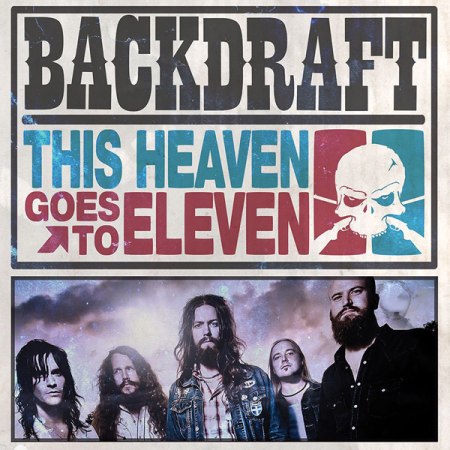 BACKDRAFT: 'This Heaven Goes To Eleven' Out Now

Stockholm, Sweden-based hard rockers BACKDRAFT have just released their third album, "This Heaven Goes To Eleven", via GMR Music. The CD was recorded — just like its predecessor, 2007's "The Second Coming" — by the band itself in its own A.R.T. Studios in Stockholm, over the course of 2010 and then mixed by Jo E who also worked on "The Second Coming". The idea was initially to capture the live feel by doing a quick and dirty record. That idea quickly went out the window, and the result instead became BACKDRAFT's most layered and experimental album from a recording point of view.

According to a press release, "This Heaven Goes To Eleven" consists of nine quite diverse songs, from obvious four-on-the-floor rockers like opening track and first single, "Idiot", and the slide-driven "The King Of Diesel", to swinging tracks like "No Love", "Stand" and "Out Of Here". The latter is, in essence, a country song dressed in a hard rock arrangement, featuring drummer Niklas Matsson as co-lead vocalist alongside BACKDRAFT frontman and lead singer, Jonas Åhlén a.k.a. Revered Sorethroat.

"This Heaven Goes To Eleven" was made available on CD as well as a limited-edition gatefold 180-gram vinyl with a free CD included (with an exclusive bonus track: a cover of "Blue Sky" by THE ALLMAN BROTHERS BAND).

"Although 'Idiot' is perhaps our most radio-friendly song to date, the album as a whole is our most varied and eclectic so far," says bass player Mats Rydström. "While some of our earlier material certainly had its tongue firmly planted in cheek, new songs like 'Yesterdays & Tomorrows', 'E.C.G.T. Blues' and 'Wheel Of No Fortune' also deal with the rougher realities of life, which we have only touched on in the past. I'd say that 'This Heaven Goes To Eleven' is definitely our most honest record."

"We were initially labeled as a pure southern rock band, which I think is a bit misleading," says lead guitarist and founding member Robert Johansson. "I view BACKDRAFT, especially where we are now, as searching for the essence of something more universal and timeless. What did Gene Simmons mean by 'Get up, and get your grandma out of here?' While working in a primarily American tradition of hard rock that began in the '70s with bands like AEROSMITH, KISS, ZZ TOP and LYNYRD SKYNYRD, we naturally come up with a hybrid of a wider range of musical input also including a lot of the music that influenced that music. Especially the lyrics draw from the country tradition with storytelling, mixing serious and hilarious elements."