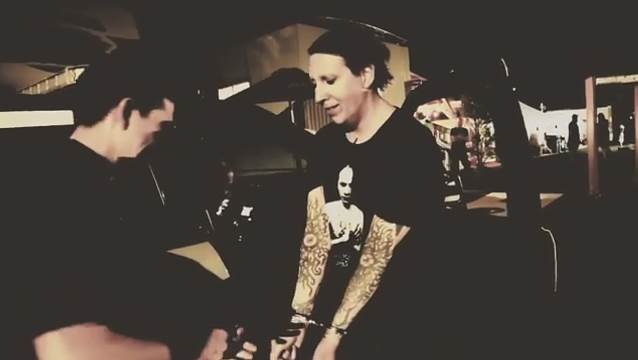 A widely shared video of Marilyn Manson being handcuffed by a police officer has turned out to be nothing more than a joke instigated by the singer.

A short time after performing at the Impact Music Festival in Bangor, Maine Sunday night (July 29), the shock rocker posted a clip of a Bangor police officer placing handcuffs on him. The video ended up getting more than a hundred thousand likes on Instagram, where it has already been viewed more than four hundred thousand times.

Earlier today, Lt. Tim Cotton took to the Bangor Police Department's Facebook page to reveal that the entire thing was set up by Manson himself, with the help of Officer Curtis Grenier, who was posted backstage at the concert.

Cotton wrote: "In the interest of saving us a whole lot of call-backs, Marilyn Manson was merely handcuffed and released immediately thereafter.

"Officer Curtis Grenier, typically listening to only Enya, and a little bit of OASIS, was posted backstage during the Impact Music Festival. He did not recognize Mr. Manson without his stage makeup — our apologies.

"Later, when approaching Rob Zombie, Officer Grenier was overheard saying, 'I have never seen him in 'The Walking Dead', so I don't know what the big deal is."

"Grenier has been spoken to and relieved of backstage concert-related duties for the foreseeable future. The Chief has determined that Grenier can work backstage during 'Lord Of The Dance' or anything related to Disney.

"Keep your hands to yourself, leave other people's things alone, and be kind to one another.

"We will be here.

"With the Beautiful People."

Manson's "unforeseen illness," which caused him to abruptly cancel his performance last Thursday night (July 26) in Toronto on his co-headlining tour with Rob Zombie, was apparently the flu.

Thursday's initial cancellation announcement was made moments before Manson was set to start his show, with his stage backdrops already up. A fan-filmed video surfaced on Twitter showing the crowd's reaction to the news, which was a mixture of boos and yells in disgust.

Manson and Zombie kicked off their "Twins Of Evil: The Second Coming" tour on July 11 in Detroit.

In the interest of saving us a whole lot of call-backs, Marilyn Manson was merely handcuffed and released immediately...