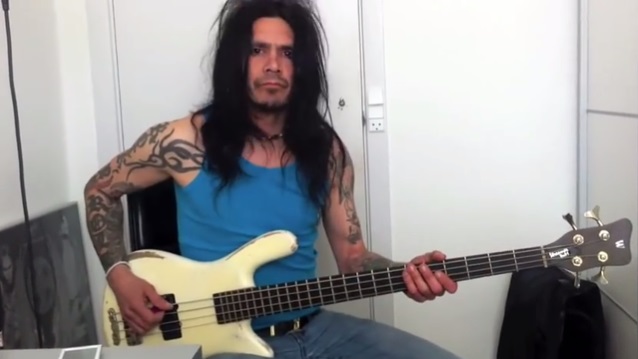 Bassist Hal Patino has been relieved of his duties with KING DIAMOND "for reasons very similar to why he was fired from the band in 1990," according to the group's frontman and namesake, Danish heavy metal singer King Diamond. King adds: "This will have NO negative impact on our upcoming shows whatsoever. On the contrary."

King Diamond recently revealed to RollingStone.com that he is working on a new album from his namesake band, tentatively due next year. "We've done a lot of stuff," he said. "We are going in some new ways that are going to be amazing."

He continued: "I've been building a studio so I can do my vocals at home. Once it's completed, we can start recording.

"[The record] will encompass the things I need to write about after what I went through. But I can't say much about it because I haven't talked to the rest of the band about it."

Asked what the hardest part of his recovery process has been, King told RollingStone.com: "It's tough to learn to breathe again. The doctors collapsed my lungs to do the work. When I woke up, it felt like I was being choked to death. I tried to pull the tubes out of my throat. The doctors tied me down to the bed. In my head, I was thinking, 'Fucking kill me.' It was horrible. I'm going to have to describe that feeling on the next album."