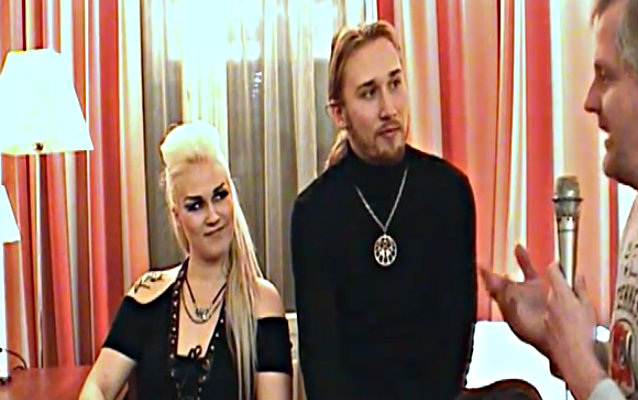 TJ Fowler of Skullbanger Media conducted an interview with vocalist Noora Louhimo and guitarist Anton Kabanen of Finnish metallers BATTLE BEAST on January 4 in Kuopio, Finland. You can now watch the chat below.

BATTLE BEAST's self-titled sophomore album entered the official chart in the band's home country of Finland at position No. 5. Released in Europe on May 17, 2013 via Nuclear Blast Records, the CD was produced and mixed by the band at JKB Studios in Helsinki and mastered by Mika Jussila at Finnvox Studios. The cover artwork was created by Claudio Bergamin (HALFORD, ARJEN A. LUCASSEN, MAGICA).

In an interview with Metal Divas, Noora explained how she ended up fronting BATTLE BEAST: "[In] September [2012], I got a call from Anton [Kabanen, guitar] that they want me to join BATTLE BEAST. I had heard their music and loved the sound and the vocals, so the next day I called Anton and said I'm in.

Fan-filmed video footage of BATTLE BEAST's entire performance on this year's Sabaton Cruise — which took place November 28, 2013 aboard the Silja Galaxy on the Baltic Sea — can be seen below.