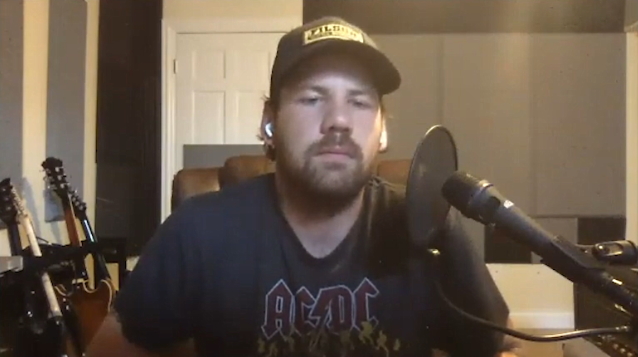 BEARTOOTH's CALEB SHOMO: Why Japan Is My Favorite Place To Visit

BEARTOOTH singer Caleb Shomo was a guest on a recent episode of "The Electric Theater With Clown" Internet show hosted by SLIPKNOT's M. Shawn "Clown" Crahan. You can now listen to the entire chat below.

Speaking about Japan's inherent mask-wearing culture, with face masks being sporadically worn during hay fever and influenza seasons, and even being adopted by the fashion and beauty industries, Caleb said: "When we first started going over there, I'm, like, 'Are people afraid of getting sick? What's the deal?' And I got explained, 'No. That means they're sick, and they're doing everything in their power to make sure nobody else gets sick.' And I was, like, 'Man, that is just such a foreign ideal to the culture I grew up in.' I feel like so much of American culture is you look out for number one — you look out for yourself. Literally, fuck everybody else that gets in your way; it doesn't matter.

"Obviously, not everybody is like this, but that's a big portion of our society," he continued. "So to hear that it's so much rooted in respect and the understanding that people have fucking lives and jobs and families, and if they get sick, that can fuck that up. So they just do it out of respect. I'm, like, 'Man, that is just fucking cool.'

"The Japanese culture, man, it is absolutely my favorite," Caleb added. "For the last record that we put out, I got to spend 10 days there in a studio. And it was just me, a guy with a camera, and I just got to live there for 10 days in Shibuya. And I was, like, 'This is just fucking so interesting to me, man.' The work ethic — even working with the engineer in the studio there, I would say something, and in 10 seconds, that shit would be done or finding out how someone else can do it. The amount of respect and understanding… I don't know… Just everything about it was a totally mindblowing experience. But it's made it my favorite place to go and visit."