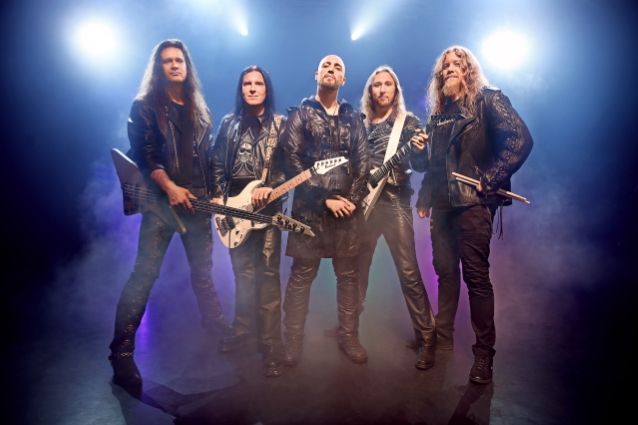 Laureline Tilkin of Tuonela magazine recently conducted an interview with guitarists Anton Kabanen and Kasperi Heikkinen of Finnish melodic metallers BEAST IN BLACK. You can watch the entire chat below. A few excerpts follow (transcribed by BLABBERMOUTH.NET).

On the writing process for BEAST IN BLACK's second album, "From Hell With Love":

Anton: "It was more or less the same. Basically, the main difference was in the production, time — we had less time now. Lyric-wise, a friend of mine, Paolo Ribaldini, helped to co-write, I think it was five songs and one song, the sixth song, was entirely his lyrics and the rest were my lyrics. That thing and that schedule was probably the biggest differences."

On the sound of "From Hell With Love":

Kasperi: "It's more like the '80s style, in my opinion — a little bit more keyboard-driven, maybe, but there are also a couple of tracks that are maybe heavier than anything on the first album. So it's kind of like a mixed bag with different kind of songs, lots of variety there. But still it works together as a whole, at least in my opinion."

On their 2018 tour with NIGHTWISH:

Kasperi: "It was great. We didn't really know what to expect when we started the tour, but we were being treated extremely well by NIGHTWISH and the crew. And the audience response was just amazing almost at every show. And we were just the support band, so, of course, we didn't know how it would turn out. But, eventually, it was just great. The whole six weeks that we did was just amazing from start to finish, pretty much. Of course, it sucked that we had to go home after that whole run, but great memories, great experiences and I hope that a lot of new people found us and checked our music out and let's see how it will be when we start the headlining tour this year. So it was just a great experience overall."

On the feedback BEAST IN BLACK has received for their live performances:

Anton: "Definitely positive feedback after every show. Like, so many surprised people. They often are surprised, 'Wow, you smile so much onstage.' And also, 'Hey, I've never heard of you guys, but we are totally fans now.' That's the best feedback we can get. That's been happening after every show."

On BEAST IN BLACK's future plans:

Kasperi: "The album will be released in the beginning of February, and we will start with four headlining shows in Finland at the end of February. And then we will do two weeks in Europe. And we will have some more shows in Finland after that. I think there's three or four weekends that we do more shows in Finland, so that's gonna be April. Then the summer festival season starts. We already have… I don't know how many of those festivals are announced already, but I think there's around 10 festivals already that we're gonna be doing throughout the summer. And that's gonna keep us busy. And for the rest of the year, there are some plans at the moment, but it's too early to say anything about that. Maybe we will try to find a good tour that we can do somewhere in Europe — maybe somewhere else; I don't know. But, like I said, it's too early to say anything concrete about it at this moment."

"From Hell With Love" will be released February 8 via Nuclear Blast. The follow-up to 2017's "Berserker" was once again recorded in Anton's Sound Request Studio, and true to the motto "never change a winning team," the cover artwork was created by Roman Ismailov, who worked on "Berserker" as well as the first record Kabanen wrote with BATTLE BEAST, "Steel" (2012).