Jason Saulnier recently conducted an interview with Jaymz Lennfield (vocals, guitar) of the Milwaukee-based band BEATALLICA — a satirical mashup act whose hilarious schtick marries the songwriting prowess of THE BEATLES to the deep-throated rock growl of METALLICA. The 11-minute chat is now available for streaming below.

Comprised of members Jaymz Lennfield (vocals, guitar), Grg Hammettson (guitar), Kliff McBurtney (bass), and Ringo Larz (drums), BEATALLICA has been converting naysayers into believers for years — having made fans throughout the world, including such renowned headbangers as DREAM THEATER's Mike Portnoy and ANTHRAX's Scott Ian.

BEATALLICA in 2005 received help from METALLICA drummer Lars Ulrich in their dispute with the Sony Corporation over BEATALLICA's "unlawful use" of the group's compositions "without authorization or license." The case has since been resolved, with BEATALLICA being allowed once again to operate their web site, Beatallica.org, and continue performing their patented blend of BEATLES tunes in a METALLICA style. 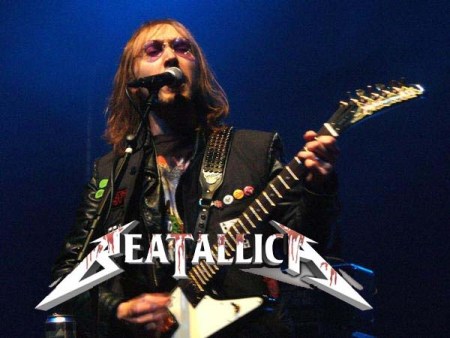