BEHEMOTH Announces North American Tour With MYRKUR; 'The Satanist' To Be Performed In Its Entirety

Polish death/black metal outfit BEHEMOTH has announced its return to North America this spring with a special tour, featuring MYRKUR as support. With plans to play their latest album, "The Satanist", in its entirety, this is one BEHEMOTH show not to be missed! A limited number of premium ticketing packages that include a commemorative laminate, meet-and-greet with the band, 18" x 24" poster set (three posters),42" x 42" wall flag, and general admission ticket are available now at www.showstubs.com/behemoth. Only 50 fans per show can purchase the package, so reserve yours now.

In addition to the concert, fans will also have the chance to view "The Congregation" exhibition at each venue. Dubbed "a symbiosis of BEHEMOTH and Toxic Vision," the display showcases the collaboration between the two parties. Over the years, the artist behind Toxic Vision (Sharon Toxic) has worked closely with the band to create their stage outfits, music videos, stage/photo props and more. "The Congregation" is a new experience and built solely for this tour.

BEHEMOTH frontman Adam "Nergal" Darski comments: "We've always pushed ourselves very hard trying to reach the highest peaks of artistic creativity. This time around, we are not only coming back to perform 'The Satanist' in its entirety, but are also bringing along a collaboration that's unheard of! Toxic Vision's renowned and absolutely brilliant artist and designer from Canada, whom we have worked with on several projects in the past (BEHEMOTH stage gear, video clip costumes...) will be accompanying us on this trek with a unique exhibition called 'The Congregation'! We are beyond excited to see how these synergies co-exist! Sharon, it's an honor to welcome you on board!"

Adds Toxic: "It is a real honour to work alongside BEHEMOTH and have this opportunity to bring a vision to life! We aim to dazzle and inspire, I am inviting everyone to step into the dark world of 'The Congregation' — an exclusive showcase of my work with BEHEMOTH. Nothing like this has been done before, and of course, nothing is really as it seems with Toxic Vision. This is a culmination of craft and magic...once you step inside, you might never find your way out."

In a recent interview with Sweden's RockSverige.se, Nergal was asked if he is already making plans for the next BEHEMOTH album. He said: "Not really, but I can say that when we were in the studio fucking around with ideas for [an upcoming] theater project, it kind of triggered my creativity and I think I'll be getting into writing mode earlier than I expected that I would. It's still too early, but I think I wanna start doing some work in 2016 and I think it would be really smart and good to have a new album out in 2017. But I know how it is — you say something in an interview, and then [people] say, 'You promised there was gonna be a record in 2017.'"

He continued: "It's been two years since the release of 'The Satanist' and it couldn't have been done better. I love the record and that's why we're playing it and it's the best-selling one and we've gotten the best reviews for it.

"I read an interview with Blackie Lawless [W.A.S.P.] where he said that as soon as the latest record was done and he left the studio, he was already thinking about the next one. I used to be like that, and it's great to wanna outdo yourself and constantly progress, but by doing that, you sometimes forget to live in the present moment. Art is no different, so what I've realized to be aware of is the present moment.

"Today, I'm the happiest artist alive, because I have the strongest fucking album in my hands and I'm super proud and fucking bursting with pride. I don't really wanna pollute my mind with future projects yet, because I wanna fully explore and enjoy the trip while it's happening."

Nergal added: "Everybody's asking and pushing for the next record, but my question is: 'Do you really wanna have a record that is not going to be one hundred percent honest and driven by whatever economic reasons or contracts? Do you really want that?'

"I would hate to see BEHEMOTH always have a new record out every two years. I'm taking my time and I'm telling people to be patient. Let me live my life. I need to learn and I have to write and fall and I have to rise again and collect all the experiences in order to make something that's gonna last longer than one or two seasons. It's like me ripping out my liver and putting it in front of you and go, 'This is it. This is my life.' That's the only art I'm interested in performing." 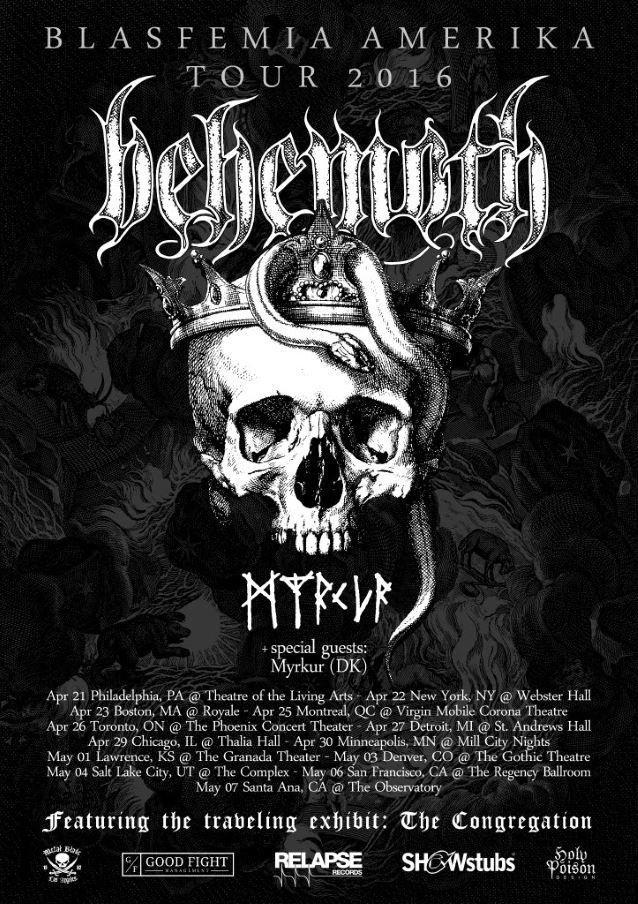