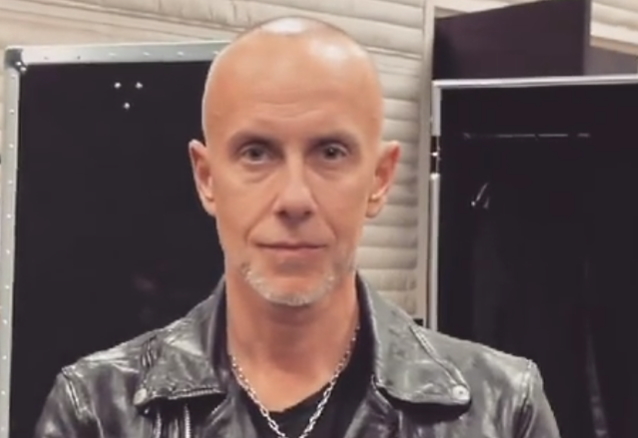 BEHEMOTH frontman Adam "Nergal" Darski has once again been acquitted of charges that he disrespected one of Poland's national symbols.

Back in January 2018, it was announced that Nergal was being formally charged by Polish authorities in a case involving the band's "Republic Of The Unfaithful" tour artwork and merchandise, which was said to be "insulting" to the national coat of arms of Poland, a stylized white eagle with a golden beak and talons, and wearing a golden crown, in a red shield. Three months later, Nergal posted an update via Instagram, revealing that "all the absurd charges" against him were "dismissed." But then in July 2020, he shared a new message on his social media revealing that the case had been reopened and the matter was being investigated further.

In early 2018, the case was referred to court by the District Prosecutor's Office in Gdańsk, northern Poland, which said that an expert on heraldry and iconography determined that the tour's artwork featured "a distorted image of Poland's national emblem."

The artwork "included elements and symbols considered Satanist and anti-Christian, with the aim of conveying content far removed from the historical and state ideology," the prosecutor's office said.

Nergal and Maciej Gruszka, who, as BEHEMOTH's webmaster, promoted the tour online, were accused of publicly affronting the Polish national emblem, which carries a maximum sentence of one year in prison. Also charged was Rafał Wechterowicz, the graphic artist who worked on the BEHEMOTH artwork.

Polish symbols are protected against public profanation and insult. According to Lexology.com, any public use that could be damaging or insulting may be considered a criminal offense. Therefore, it is important not to use any national symbol (even if artistically processed) in a way that could be deemed as disrespectful or offensive.

On Friday (May 6),the District Court in Gdańsk issued a judgment in the case. In the opinion of the court, the graphic design on the poster is not an image of the Polish emblem. As judge Monika Jobska stated, "the subject of the public insult described in Article 137 of the Criminal Code must be, inter alia, the emblem. Not a graphic design, graphic design referring to or similar to an eagle. According to the opinion of one of the experts, the design was created from scratch by the author and does not constitute a modification of the emblem of the Republic of Poland," said the court in its ruling.

Included on the poster was a white eagle without a crown; instead of the crown, devilish horns grew out of the bird's head. The eagle was inscribed with two snakes, skulls and an inverted cross. The eagle was placed on a red background, and the whole style was reminiscent of the Polish coat of arms. Above the eagle there is also the inscription "Rzeczpospolita Niewierna" (The Republic Of The Unfaithful").

The judge said: "The symbols used in the poster were understood as contrary to faith. For these people. faith is synonymous with Polishness. The Polish state is a secular state." The judge added that this case did not concern violation of religious feelings but state feelings.

Earlier today (Saturday, May 7),Nergal took to his Instagram to weigh in on the latest acquittal. He wrote: "Fuck yeah! Acquitted again !!

"This has begun over 3 years ago, when one of the PIS politicians felt that BEHEMOTH has offended Polish National Emblem with a design which was used to promote Polish leg of a BEHEMOTH's tour. Obviously, nothing of such was happening. And it's been sooo clear for everyone except for the right wing politicians and their fans. Yet the the politicized prosecutor's office launched an investigation and accused us of insulting the Polish emblem.

"3 years ago the first court hearing was held," he continued. "Eventually we won and were all acquitted. Then, the prosecutor appealed and the appellate court recalled the case to the 1st instance for reconsideration. And now we have been acquitted again! But the story continues, have your fingers crossed. Still, it's the second battle won in a row!

"ANOTHER battle won!" Nergal added. "Thank you all who made that happen, thank the Judge for being fair, open minded and reasonable. And brave in such strange times...

This is not the first time Nergal had encountered legal problems in Poland related to his social media activities. In February 2021, he was convicted for offending religious feelings by a court in Warsaw. The charges stemmed from an image the Polish musician posted on social media showing a foot stamping on a picture of the Virgin Mary. At the time, Darski was ordered to pay a fine of 15,000 złoty (approximately $4,000) and court costs of almost 3,500 zloty (approximately $942).

Darski later contested the judgement and the case was eventually dismissed. In the ruling, the judge wrote the photo in question was posted on Nergal's social media and was therefore only made available to a specific group of people who could read it after observing the disclaimer at the top of the page: "The content presented on this profile may offend your religious and other feelings. If you don't want that to happen, stop following me."

After the February 2021 verdict against him was announced, Nergal told The Irish Times that he was appealing his conviction because not doing so would have resulted in him having a criminal record and therefore not being able to tour in many countries, including the United States and Australia.