Guitarist/vocalist Adam "Nergal" Darski of Polish extreme metallers BEHEMOTH is auctioning a seven-string Ibanez guitar (pictured below) via eBay. He says, "This guitar is an integral part of BEHEMOTH's history. My first-ever seven-string axe that I bought right before we entered the studio to record 'Zos Kia Cultus'. It's a great-playing instrument that sounds just awesome and heavy as fuck! I used this axe in the studio to nail songs like 'Slaves Shall Serve' from 'Demigod' or 'As Above So Below' from 'Zos Kia'. You can also see me playing that beast in the video clips to these tunes. Also, it served me well during multiple tours all over the world!"

For more information and/or to place a bid, go to this location.

On Monday, February 16, BEHEMOTH entered Radio Gdansk studio in Poland to begin work on the follow-up to their highly acclaimed 2007 album, "The Apostasy". Daniel Bergstrand from Sweden's Dugout Productions (MESHUGGAH, IN FLAMES, DARK FUNERAL) joined the band in the studio to produce the drums on the record.

Nergal previously stated about the new material, "I must confess that I'm way more excited about this record than I was for 'The Apostasy'. It's probably the whole label situation that we had to deal back then, Inferno's injury that caused crazy deadlines that completely drained the energy out of my system… I even started treating that album as unwanted child. Weird, because from time perspective, it's a great one. This time though everything was planned much in advanced. I found time to live my life, get some energy back, get inspired and so on… When we met in October it was obvious that all of us were really hungry for making new music. It's definitely 100% BEHEMOTH. I would risk saying that we do have our own style but it's still improving, evolving in different directions every time we approach new project. Most of the songs are the really fast, technical and intense, at the same time there's a lot of diversity. There's even a very slow, massive song that's probably the most epic tracks in BEHEMOTH's history. Everything sounds more serious and…dangerous (I love that word, ha ha). There's probably more sinister vibe in our music this time too."

BEHEMOTH will interrupt studio work to play one exclusive show in Belgium at Maximum HXC Metalfest on March 7. 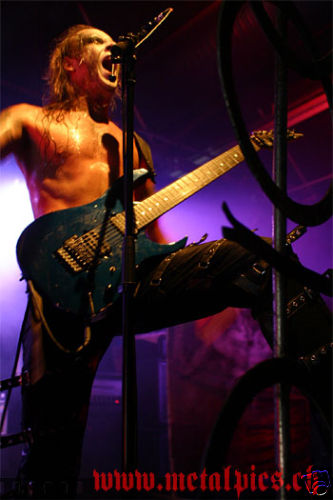