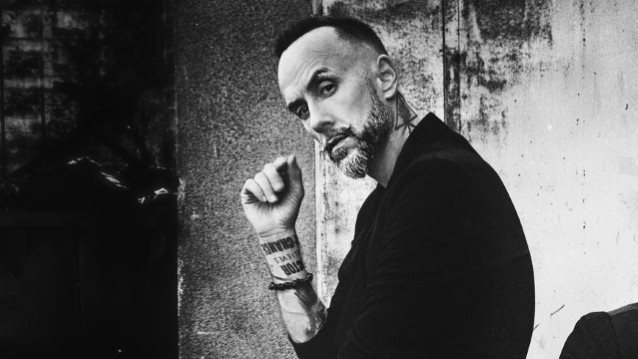 BEHEMOTH frontman Adam "Nergal" Darski has told Metal Hammer magazine that working on his side project ME AND THAT MAN has given him a "great hunger to make new music" with his main band.

ME AND THAT MAN, which pairs Nergal with British/Polish rock musician John Porter, will release its debut album, "Songs Of Love And Death", on March 24 through Cooking Vinyl. The project draws heavily on blues, country and folk to make music as dark as if it was being screamed over shredding guitars.

"Once I did ME AND THAT MAN, I came back with a great hunger to make new music for BEHEMOTH.

"It's a little different. On one hand, where we stopped with 'The Satanist', I take it from that place, but I'm developing. There's new sounds and there's new flavor I'm incorporating in these new songs.

"It's exciting. We've got a few songs started, some are finished — but we're not rushing. We want to make sure everyone is on the same page, everyone is happy with the process and we are comfortable with everything that comes out."

He added: "All those people who don't like that I'm doing a thing on the side, relax. BEHEMOTH is going and I bet it's going better than ever. Be patient. I've got to do this thing first, then I'll come back and do something that's spectacular again."

In other news, Nergal has revealed that BEHEMOTH is currently mixing a new album focusing on the touring cycle behind the band's 2014 album "The Satanist". It is not presently clear when the effort will be made available.

BEHEMOTH last year completed a North American tour where the band played "The Satanist" in its entirety. In addition to the concert, fans also had the chance to view "The Congregation" exhibition at each venue. Dubbed "a symbiosis of BEHEMOTH and Toxic Vision," the display showcased the collaboration between the two parties.