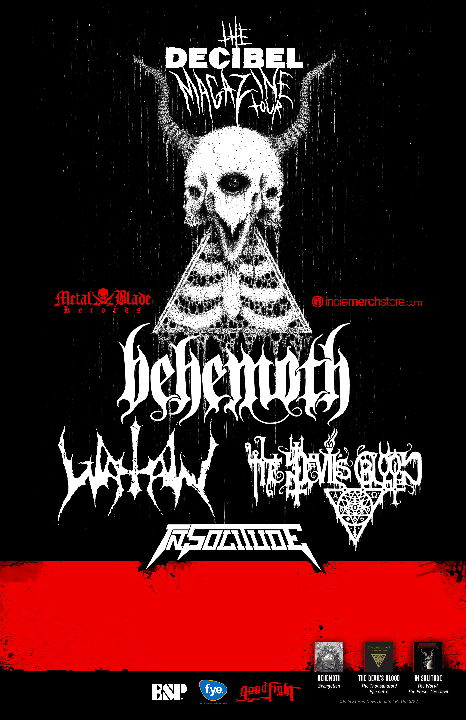 Superskum.com has uploaded quality video footage of BEHEMOTH's April 27 concert at the Summit Music Hall in Denver, Colorado as part of the inaugural "Decibel Magazine Tour". You can check out the clips below.

In a recent interview with Turbo from RSU Radio and the Metal Meltdown, BEHEMOTH vocalist/guitarist Adam "Nergal" Darski was asked how long fans will have to wait for a new BEHEMOTH studio album. "I've got plenty of stuff written down — not completely finished lyrics, but a lot of ideas and verses here and there and some choruses here and there," Nergal replied. "It's a slow process. I'm screwing around with some riffs here and there at the backstage of the venue or the back lounge [of the bus], I'm just jamming out. I think there's plenty of ideas, but sometimes it takes me weeks to realize or to come up with something that I consider, myself, 'Wow, this is it. This is the stuff that should be on the next BEHEMOTH record.' It looks like, with the tenth record, it's worse and worse for me to come up with something I will feel that is great.

He added, "I've always said that... Right now we're good musicians, and we could easily fabricate anything. Metal Blade would have the record fucking in three months — if we want that — but it wouldn't be honest. It wouldn't be 'us.' I just tear out a piece of my heart and soul and my skin and I just fucking put it into my art. Otherwise it makes no sense to me. So this process sometimes takes time and energy and experience, and I'm collecting these experiences by now. But you can be sure that the next BEHEMOTH album is coming out next year; that's for sure. I just can't say if it's before or after summer, but we [will] start working [on it] intensively this summer."

The inaugural "Decibel Magazine Tour" kicked off on April 11 at Alrosa Villa in Columbus, Ohio.