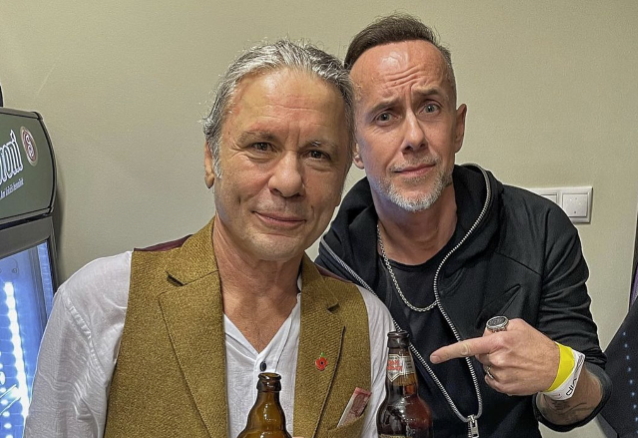 BEHEMOTH's NERGAL: 'I Look Up To IRON MAIDEN's BRUCE DICKINSON'

In a new interview with "The Dan Chan Show", BEHEMOTH frontman Adam "Nergal" Darski spoke about his folk/blues/Americana-influenced solo band ME AND THAT MAN and the various business ventures he is pursuing away from the music business. Asked what he looks for when deciding which projects he gets himself involved with, Nergal said: "As human beings, we're very complex. It's pretty much just to ask if we let ourselves try things out.

"I love my heavy metal cage, and that is my mother womb, so to say, but I'm really willing to try things out. I'm not saying I'm gonna be a good actor, but I really wanna play in a theater at some point. If I fail, I fail, but let me fucking try.

"My mind is really all over the place," he continued. "Some people, they can't really split their mind — they just focus on one thing and that's it. I can really do three things at the same time — almost like Napoleon [Bonaparte, who reportedly could think and speak so fast that he was able to dictate five letters to his secretaries at the same time]; I'm just a little taller than him.

"Yesterday I had dinner with [IRON MAIDEN singer] Bruce Dickinson. If you ask me what I look up to, I look up to Bruce Dickinson. He's the renaissance man. He's someone who's, like, holy shit. That is awesome. I mean, what all he does — all he captures, all he embraces. All the knowledge, all the curiosity, all that hunger for life and all its dimensions, that is a way to go for me.

ME AND THAT MAN will release its third full-length studio album, "New Man, New Songs, Same Shit, Vol. 2", on November 19 via Napalm Records.