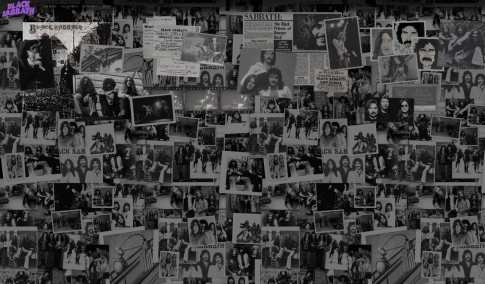 Drummer Bill Ward has been removed from all the photos on the homepage and gallery section of BLACK SABBATH's official web site after he announced that he was unable to to reach a contractual agreement with his bandmates about participating in their upcoming reunion shows.

In response to the move, Tony Conley of the Facebook page 1,000,000 Black Sabbath Fans Say Yes To Bill Ward wrote, "That is simply one of the most dastardly, chickenshit things I have ever seen done in my 40-some years of watching rock and roll. Definitely the maneuver with the least class, and disrespect.

"Bill's statements have been filled with love and respect. BLACK SABBATH's responses have been shallow and cold.

"Two sides to every story? Then tell yours, BLACK SABBATH, and stop hiding. If Bill can't hack it — say so. If he wants more than his share financially — say so. If there is a reasonable explanation for this shameful display, please help us to understand what it is. Currently, you look shameful and sad. That is not how we wish to feel about you.

BLACK SABBATH will play a hometown concert in Birmingham, England tomorrow night (Saturday, May 19) as a warm-up show for the band's appearance at the Download festival at Donington next month. SABBATH has hired a replacement drummer for the upcoming gigs but has yet to reveal the musician's identiry.

A furor erupted online in 2007 after photos of Michael Anthony at the official VAN HALEN web site were either removed or replaced by an image of guitarist Eddie Van Halen's son Wolfgang, who played bass on the group's recent album and tour. The photos were restored less than two days later.