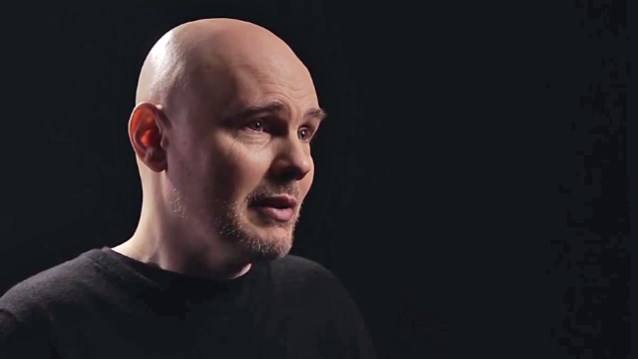 According to The Pulse Of Radio, SMASHING PUMPKINS frontman Billy Corgan has declared war on pop music. Corgan stopped by a local morning show this week while on tour in Australia, where he was asked about the state of pop and replied, "To me [pop music) is headed towards a form of pornography. You have young women sexualizing themselves earlier and earlier in really inappropriate ways to gain attention because it's really all about getting YouTube hits."

Corgan blamed the decline of the music industry not on streaming or illegal downloading, but on the dumbing down of music itself, saying, "Our business is shrinking because it's becoming more lowest common denominator."

Corgan also said that rock acts need to take a "more aggressive" stance against pop artists, explaining, "Particularly in America there's a very cozy relationship between rock stars and pop stars — and I don't think that's a good relationship. Everybody belongs on their own side of the street for a good reason."

The singer and guitarist was also asked about the recent incident at the Grammy Awards where Kanye West rushed the stage after Beck won an upset victory over Beyonce for "Album Of The Year."

Corgan responded, "I think it's inappropriate for any artist to take somebody else's moment and make it their own… I’ve stood at that podium too and I’ll tell you what, if somebody got up on my stage, I would knock them out."

Corgan and the current version of the PUMPKINS are touring behind the band's latest studio album, "Monuments To An Elegy".