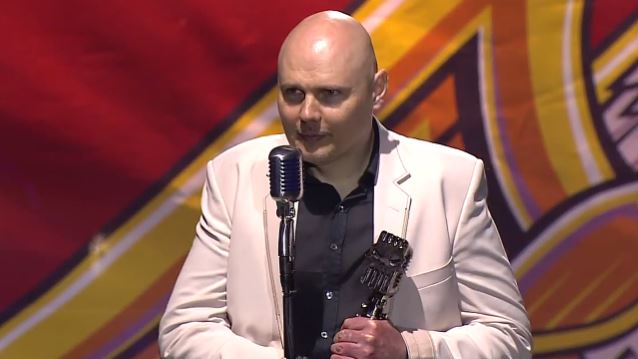 Seven years after he reactivated the band, frontman and founder Billy Corgan is thinking about putting the SMASHING PUMPKINS to sleep again. According to The Pulse Of Radio, Corgan told the Chicago Tribune in a new interview that the response to the band's two upcoming album will play a big role in deciding the PUMPKINS' future. He explained, "When this [new album] process is over, I'm either going to bail on this ship for good, like 'I'm done,' or I'm going to have a new ship to sail on."

Corgan admitted it's been hard to get fans to pay attention to new music from the group, saying, "How do you say, 'I still matter'? How do you say, 'How does one of my contemporaries get treated like a contemporary artist, and how do I get treated like I'm supposed to play 'Siamese Dream' for the rest of my life?' At some point you've got to fight this fight or go away."

Corgan has said ever since bringing the band back to life in 2007 that he did not want the PUMPKINS to be a nostalgia act. "To go back under the SMASHING PUMPKINS name engendered a lot of people expecting us to be nothing more than a reunion band, playing its greatest hits, and with a fan base not particularly keen to listen to the new music," he said. "What I try to tell people that get caught up in the reunion kind of concepts — like where are the original members and stuff like this — the band was founded on an idea that it must be progressive and it must always be moving forward."

The first of the two new PUMPKINS albums, "Monuments For An Elegy", is expected out in early 2015, while the second, "Day For Night", will follow later in the year.

The SMASHING PUMPKINS initially went on hiatus in 2000 after 12 years and six albums. Corgan revived the group in 2007 and has released three albums since then. He remains the only original member of the band.