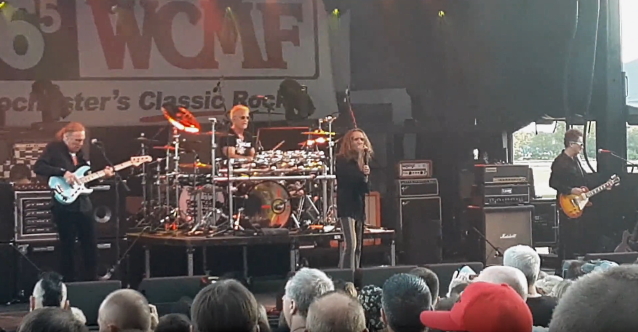 Billy Sheehan spoke to the "Music Matters" podcast about the progress of the recording sessions for the new studio album from TALAS, the 1970s upstate New York band which initially earned its name while performing gigs in the Buffalo and Rochester scenes. Although TALAS started out by playing covers, it eventually introduced originals to its setlist.

"We're just about to finish [the] new TALAS record," Sheehan told "Music Matters" host Darrell Craig Harris (see video below). "That's the version of TALAS that I left in '85 to go join Dave [Lee Roth's solo band]. And instead of rewriting the songs better and smarter, because I know a lot more now than I did then, [we wanted] to do it like we did it when we did it. And so we're doing exactly a little snapshot of what we did back in 1985 — from the heart and for real. And it's really cool, it's shaping up to be. The drummer, Mark Miller, is as good as ever, and he was just one of the greatest drummers.

"We're doing all songs that we never really recorded in the studio," he continued. "Some we did on the 'Live Speed On Ice' record, but they were never recorded for real in the studio. All those songs are all the songs from our live set, which we never recorded. It's kind of just a snapshot of the way we left it back when we did."

In 2017, Sheehan rerformed TALAS with a lineup featuring Phil Naro and Mark Miller, along with new member Kire Najdovski, to play at the "Bands At Barnard" charity event in Greece. The group has played sporadic shows since then.

Last month, Naro revealed that he is battling tongue cancer. The 62-year-old musician told iHeartRadio.ca that his cancer returned in the fall of 2019, six years after he had a tumor removed from his neck.