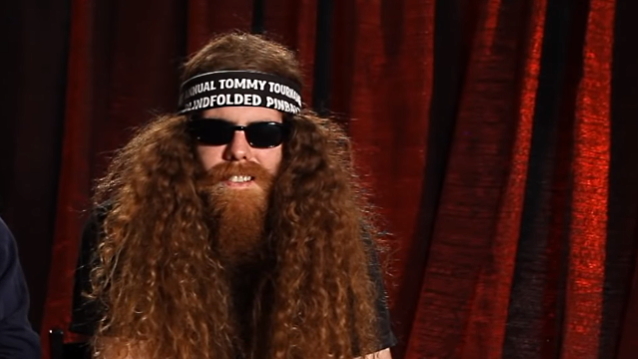 Late last night, BLACK BREATH drummer Jamie Byrum took to the group's social media to write :"As some of you may already know, our brother and bassist Elijah Skye Nelson passed away on Saturday. The remaining members of BLACK BREATH would like to offer our deepest condolences to Elijah's family and to say thank you for raising the sweetest and most original person any of us have had the pleasure of knowing. His kindness, generosity, and beauty cannot be overstated. Elijah treated all humans from every walk of life with sincerity and generosity; lacking any prejudice or judgement. I think that's something we can all take away from his legacy: be kind to each other.

"We would also to take this time to thank everyone of you for the love and support over the years and the blood, sweat and tears at the gigs. Y'all are the reason we do this and without each other we are nothing.

"BLACK BREATH have no plans for live actions or recordings but if that changes, you'll hear about it here."

Nelson was 40 years old at the time of his passing. No cause of death has yet been revealed.

A number of other artists have paid tribute to Nelson in the wake of his passing, including Swedish extreme grindcore act NASUM, who wrote: "We are obviously saddened by the news of Elijah Nelson's passing. BLACK BREATH were very important to NASUM during the final leg of the farewell tour. Elijah was the Cliff Burton of death metal and he will be missed."

Cleveland's metallic hardcore legends RINGWORM wrote: "See you on the other side Elijah Nelson. Sad news. RINGWORM sends nothing but light and love to you and yours brother. Enlightened travels in the beyond, young wizard."

BLACK BREATH's latest album, "Slaves Beyond Death", was released in September 2015 via Southern Lord. The disc was recorded with Kurt Ballou (CONVERGE) at GodCity and mastered by Brad Boatright at Audiosiege (NAILS, INTEGRITY, OBITUARY).

Upon its release, "Slaves Beyond Death" was praised for exhuming the classic Stockholm deathcrush of DISMEMBER and ENTOMBED through a merciless d-beat hardcore delivery.

BLACK BREATH has been largely inactive for the past three years.

As some of you may already know, our brother and bassist Elijah Skye Nelson passed away on Saturday. The remaining...