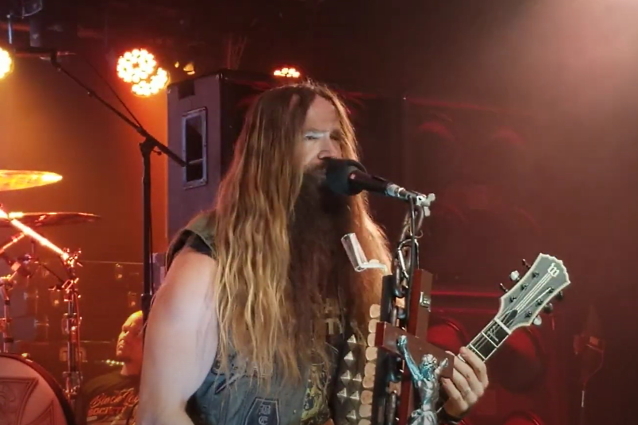 BLACK LABEL SOCIETY has been forced to postpone two shows on its U.S. tour with Nita Strauss and Jared James Nichols after frontman Zakk Wylde "lost his voice." The May 9 concert in Lexington, Kentucky will now take place on May 23, while the May 10 show in Raleigh, North Carolina has been pushed back to August 30.

In an interview with the Morristown, New Jersey radio station 105.5 WDHA, Wylde stated about the writing process for "Doom Crew Inc.": "The way it always goes, it's always the music first and then a melody. And then I've gotta find out something I wanna sing about. So then I'll write the lyrics. That's usually always the way it goes. And then, when it's all done, then the solos go on it. The painting's all done, and the solo is the frame that goes on the thing. So you can sit back and look at the whole thing. That's the way we pretty much always do it.

BLACK LABEL SOCIETY and ANTHRAX will team up for a 24-date North American tour this summer. The five-week trek will kick off on Tuesday, July 26 at Van Buren in Phoenix, Arizona and wrap up on Sunday, August 28 at the Fillmore in Philadelphia. Both bands will play headline sets. HATEBREED, celebrating the 20th anniversary of the "Perseverance" album, will be special guest.

It’s with great regret that Zakk Wylde has lost his voice and is unable to perform tonight’s show. We are rescheduling...

It’s with great regret that Zakk Wylde has lost his voice and is unable to perform tonight’s show in Raleigh, NC. We…