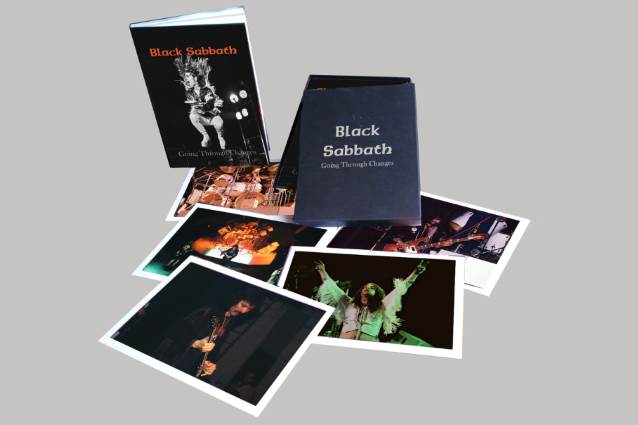 BLACK SABBATH: 'Going Through Changes' Photo Book Due In September

Due on September 28 via Wymer, "Black Sabbath: Going Through Changes" is a photographic journey of BLACK SABBATH during the halcyon days of the seventies.

Throughout a long and sometimes turbulent career, BLACK SABBATH's classic lineup of Ozzy Osbourne, Tony Iommi, Geezer Butler and Bill Ward virtually created the blueprint for heavy rock. With eight albums plus hundreds of concerts across the globe, this was the defining decade for SABBATH that saw them rightly earn their place as one of the most iconic bands off all time.

With photos spanning the decade, this beautifully presented coffee-table style book is a celebration of BLACK SABBATH in all its glory. Containing many previously unpublished shots of the band in the USA and Europe, "Going Through Changes" comes in its own block foiled presentation box with a set of full-color prints, perfect for framing.

This unique item is limited to 500 copies worldwide. Order by September 3 and have your name printed in the book on a dedicated fan page.

The original lineup of SABBATH came together in 1969 with Iommi, Osbourne, Butler and Ward. That lineup recorded and toured through 1978, and periodically reformed through the '90s and 2000s for live work.

They regrouped again in late 2011 for a new album and tour, although Ward dropped out after a few months over financial issues. SABBATH has used Ozzy's regular touring drummer Tommy Clufetos since then for live work. RAGE AGAINST THE MACHINE's Brad Wilk laid down the drum tracks on the band's latest album, "13", which came out in June 2013.