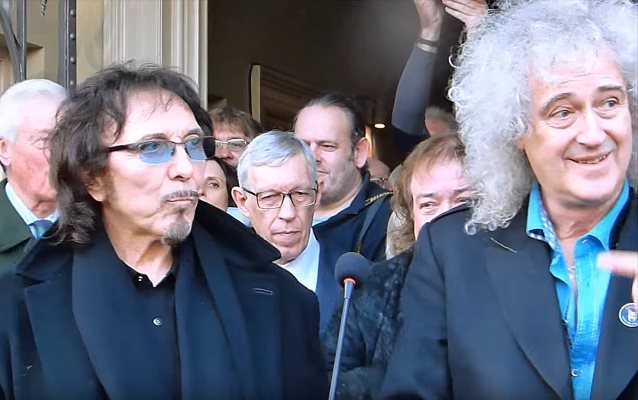 May, who was good friends with Cozy, praised Powell, calling him "a brilliant innovative world-beating drummer." He added: "He was one of the world's greatest drummers and musicians. We have the great honor of unveiling this."

Iommi said: "It was great to play with [Cozy]. This is a great moment."

The event was reportedly filmed and will be included in a documentary about Cozy's life, "Dance With The Devil - The Cozy Powell Story", which has been in production for the last several years.

The plaque was created by Cirencester Town Council in response to a petition started by Italian woman Rossella Amadori and signed by 3,000 people.

Powell died on April 5, 1998 following a car crash while driving his Saab 9000 at 104 mph (167 kmh) in bad weather on the M4 motorway near Bristol, England. According to a BBC report, Powell's blood-alcohol reading at the time of the crash was over the legal limit, he was not wearing a seatbelt, and he was talking to his girlfriend on his mobile phone.