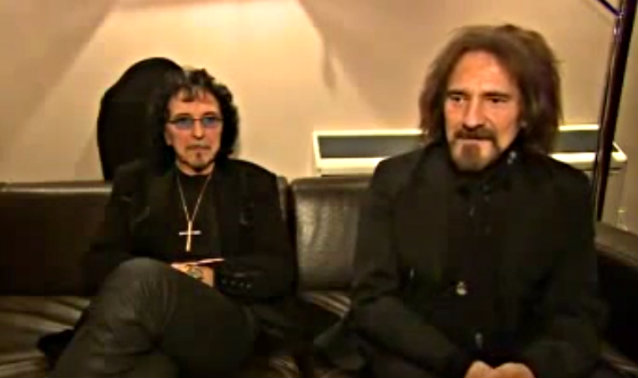 Original members of Birmingham, England's heavy metal pioneers BLACK SABBATH returned to the city for two sell-out concerts. With the exception of one "intimate" homecoming show the band played at Birmingham Academy on May 19, 2012, the dates at Birmingham's LG Arena (December 20) and National Indoor Arena (December 22) marked the first time the trio had played together in the city since May 2005. Fans from as far as Australia travelled to the concerts, with many queuing outside the venues for 12 hours before the shows began. Bassist Geezer Butler and lead guitarist Tony Iommi, who formed the band with singer Ozzy Osbourne in 1968, said Birmingham gigs are always the "most nerve-wracking" to play. Check out a BBC report below.

Fan-filmed video footage of BLACK SABBATH's December 22 concert at National Indoor Arena in Birmingham, England can be seen below.

According to The Pulse Of Radio, BLACK SABBATH guitarist Tony Iommi is not sure if making a follow-up to this year's reunion album, "13", would be a good idea for the group. Iommi said in Revolver magazine, "I don't know if that would be an anticlimax if we wrote another album. I'd like to, but we haven't actually spoken about it, you know? I don't know if that would be a good idea after this one, because this one's done so well. I'm sure we'd all like to do one. But I don't know. Maybe I should talk to the others about it."

BLACK SABBATH will return to North America in 2014 for 10 shows that will be among the last in support of "13".