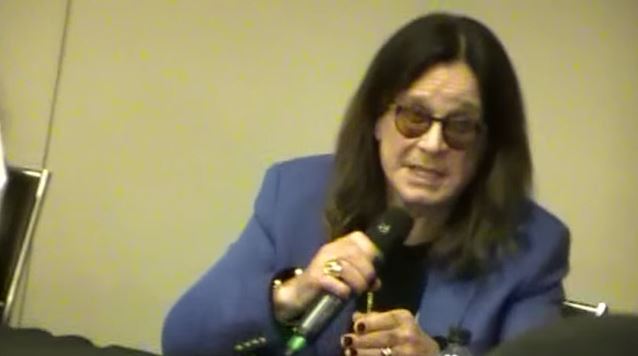 Ozzy Osbourne has confirmed that BLACK SABBATH will embark on one last tour in 2016 before calling it quits. "The plan is that next year [we'll do] the final BLACK SABBATH tour and then it's over," Ozzy said (see video below) during an April 24 press conference in in São Paulo, Brazil, where he performed as part of this past weekend's Monsters Of Rock festival. He said that the plans "could change," and added: "We all live in different countries and some of them want to work and some of them don't want to, I believe. But we are going to do another tour together."

Ozzy also said that he will keep recording and touring as a solo artist once SABBATH has packed it in. "I'm still gonna continue my solo career," he said. "I'm doing these few [solo] gigs down here [in South America] now. Then at the beginning of next year, I'm going out with SABBATH. The SABBATH thing is folding up after the next tour, but I'm gonna continue my solo career."

Asked what the differences are between performing with BLACK SABBATH and playing concerts with his solo band, Ozzy said: "With BLACK SABBATH, I'm part of a band that I grew up with, so we all know each other's temperaments… You know where to tread and where not to tread. It's a completely different [style] of music anyway [to my solo material] — it's very slow and heavy. And [BLACK SABBATH guitarist] Tony Iommi, he's the master of metal riffs; you can't beat him."

He continued: "It took [BLACK SABBATH] 45 years to get our first No. 1 album [with 2013's '13']. And Tony, I was amazed at what he was [coming up with]. Considering that he was fighting cancer [during the making of the album]. He's doing great now. I text him now and again. He sounds fine."

Iommi earlier in the month dismissed rumors that his health is the reason why the band canceled an appearance at this year's edition of Ozzfest Japan in November. Iommi, who was diagnosed with lymphoma in early 2012, wrote, "I'm not sure how the rumor of my being unwell started as I was away on holiday!" He added, "Once you've had something like lymphoma, the fear that it will return never leaves. All I can say is that right now I'm fine and have regular blood tests."

Although it was announced last month that SABBATH would give its final Japanese performance at the event, the band dropped off the bill on April 8. Ozzy will now perform solo instead, accompanied by yet-to-be-disclosed "friends."

Ozzy has said previously that BLACK SABBATH planned to record one final studio album in 2015, to be followed by a farewell world tour. A rep for SABBATH told Rolling Stone on April 9 that there have been talks about a farewell tour but nothing has been confirmed.

It is not clear whether SABBATH has begun writing a new album yet. Ozzy has also hinted at working on a solo album, and will do a residency in Las Vegas this October.

"13" was the first SABBATH album in 35 years to feature Osbourne, Iommi and bassist Geezer Butler together, with drummer Bill Ward the only founding member to sit out the record and world tour.

Osbourne released a solo career retrospective titled "Memoirs Of A Madman" in October 2014. The CD contained 17 of his greatest hits, while the DVD featured music videos, rare live performances and interviews.