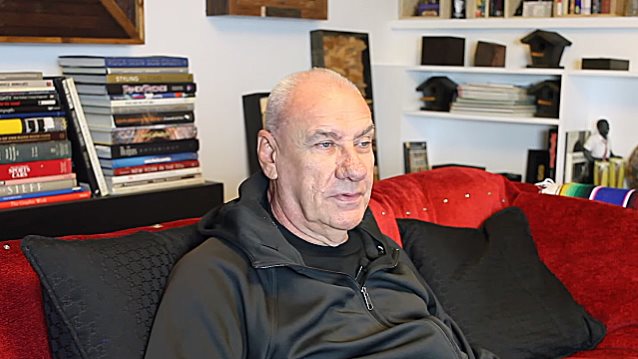 A video clip of BLACK SABBATH's founding member and former drummer Bill Ward reflecting on the glory days of SABBATH and the dangers of drumming on LSD can be seen below. The footage is taken from "The Doom Doc", is an upcoming documentary about doom, sludge, stoner and all things slow and heavy. Telling the story of Sheffield DIY collective Holy Spider Promotions, director Connor Matheson speaks to Ward, CROWBAR's Kirk Windstein, CONAN, PRIMITIVE MAN and SLABDRAGGER and a host of upcoming bands from the U.K. underground, like KUROKUMA and UNDER.

Doom is a style of heavy metal that's all about crushing riffs played at sluggish tempos through huge amps, and the foundations of the genre were laid on SABBATH's debut album in 1970.

Made on a crowdfunded, shoestring budget, the film will receive its world premiere on Sunday, July 9 at the Showroom in Sheffield. The screening will be followed by a question-and-answer session with Connor.

"Everything in the film is new footage," Connor told Terrorizer. "It's not a who's who of doom — we've not gone round trying to get all the biggest names and make it about the history of it. We've tried to document what's going on now. We've also tried to put a lot more underground, unheard of bands in with really big bands like BLACK SABBATH. The idea is to boost the Sheffield scene. People are going to be drawn to it because it's got big names, but they're also going to see other bands people hadn't heard of before."

Connor added: "Someone should be able to watch this who's never heard of doom before and understand why people like extreme music, how it does fit in society, how it's kept alive and the culture around it."

Following the film's screening in Sheffield, Connor and his team plan on submitting it to documentary festivals around the world.