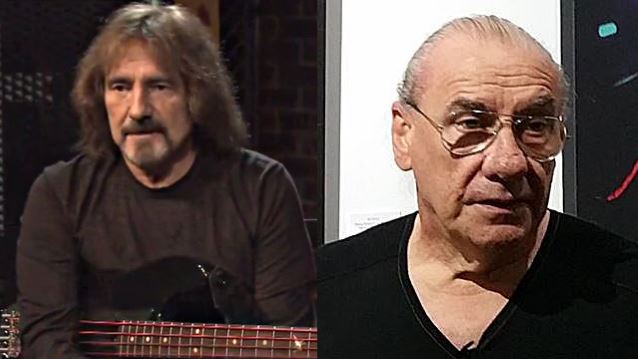 Earlier this week, Geezer Butler told Radio.com that Ward was offered an opportunity to join the band for the final U.S. concert of its farewell tour, but that Ward declined because he wanted to do either the whole tour or nothing at all. But Ward fired back, saying he "never received an offer" to play the last SABBATH concert in the States, which is scheduled to take place on September 16 in Phoenix.

Now Butler has tweeted: "It appears Bill Ward was never invited to do a last show – my mistake. Sorry @billwarddrums."

The members of SABBATH have maintained all along that Ward — who has sat out the band's reunion since early 2012 — was physically incapable of playing a full tour, an assertion that Ward has denied. Asked about the possibility of Ward joining the band for at least a few songs in Phoenix, Butler told Radio.com: "It's been mentioned to him. But he doesn't want to do it. He wants to do the whole tour or nothing. We'd love him to come on at the very last gig and be part of the whole thing, but he didn't want to do that."

Ozzy's solo drummer, Tommy Clufetos, is again handling the drums on the farewell tour, which kicked off last week.

Ward issued a statement after Butler's comments appeared online, saying: "I never received an offer to play the final show of 'The End' tour with BLACK SABBATH. When the tour was confirmed, my management reached out to the BLACK SABBATH management to inquire as to whether or not they would like to discuss my participation in the tour. We were told there was no interest. That is last conversation we had with them regarding the tour."

Ward added: "I will say that I wouldn't want to play only one gig when I am completely capable of touring. I would not validate their untrue statements about my health by playing one only gig. Also, I wouldn't want to show up for only some of our fans and not for all our fans when I could have played multiple shows."

Ozzy told The Pulse Of Radio during SABBATH's 2013 reunion tour that Ward was not in shape to participate. "Bill Ward has got the most physically demanding job of the lot of us, 'cause he's the timekeeper," he said. "I don't think personally he had the chops to pull it off, you know. The saddest thing is that he needed to own up to that, and we could have worked around it, whether we had a drummer on the side with him or something."

Butler told Classic Rock Revisited earlier in the month about why SABBATH was unable to come to terms with Ward in order for the drummer to participate in the group's farewell tour, saying: "It's beyond the money thing. It is not really anything to do with that. It is whether he's capable of touring or not. He hasn't been well for a long time. He's had a couple of heart attacks."

Ward has insisted that his health is good and that he has been capable of performing, but was not offered a "signable" contract by SABBATH.

It appears Bill Ward was never invited to do a last show - my mistake. Sorry @billwarddrums