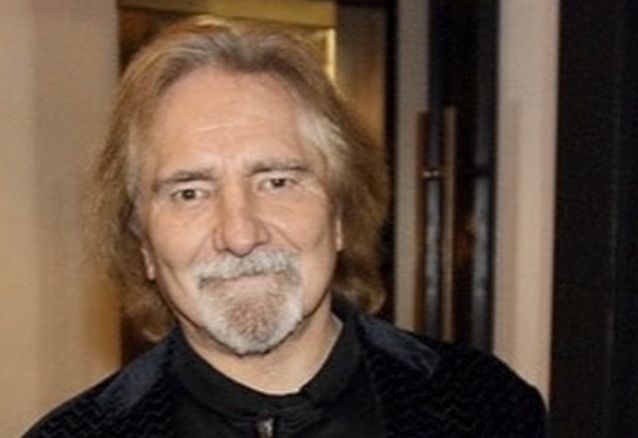 In the latest episode of the "On The RAGS" podast, Gloria Butler, the wife of BLACK SABBATH's Geezer Butler, and her co-hosts Risa Shapiro, Amy Motta and Sloan Kivo talked to the legendary bassist about life, recreation and inspiration. Asked why he never swears, Geezer said (as transcribed by BLABBERMOUTH.NET): "When I was a kid, 'cause I had very, very strict Irish Catholic parents. There were seven kids in the house. None of us were ever allowed to swear. And so when I went out the house, I used to have the worst mouth in the street on me. And this one day I was calling everybody all these swear words and everything, and somebody complained about my language, and the police came to frighten me, to the house. My dad belted the hell out of me with his leather belt. That's what stopped me swearing. And he said to me, 'It makes you sound really, really ignorant, 'cause only thick people swear because they can't think of a proper English word to say.' That stuck in my mind. And when I went to swear, I'd think of a different word. And it expanded my vocabulary."

As for how he got his famous nickname, Geezer, whose real name is Terry, explained: "It came because when I was at school, my brother was in the army, and he was based with a lot of Cockneys. And people in London call everybody a 'geezer.' [It means] just a man — like, 'Hello, mate.' It's just like somebody calling you 'dude' over here [in America]. In England, it'd be 'geezer.' So my brother used to come home from leave from the army, and he'd be going, 'Hello, geezer. How are you, geezer?' And so because I had looked up to my brother when I was about seven years old, I'd go to school calling everybody a geezer. And so that's how I got cursed with it."

A founding member of BLACK SABBATH, Geezer is also the lyricist of such SABBATH classics as "War Pigs", "Iron Man", "Paranoid" and others.

Seven months ago, Geezer confirmed to Cleveland.com that he is writing a memoir.

Hosted by Risa, Amy, Gloria and Sloan (the RAGS),"On The RAGS" features four extraordinary women from diverse backgrounds with unique insight into business, politics, family and entertainment. Their viewpoints, while often serious, are more often hilarious.