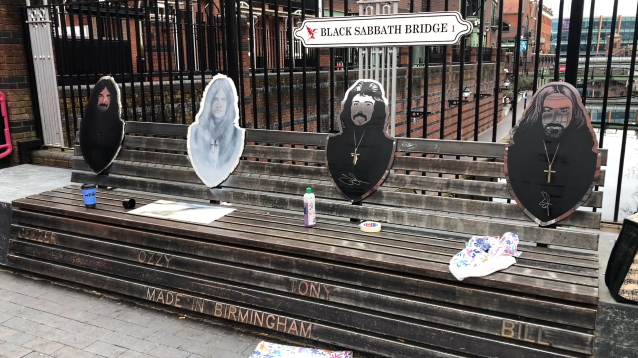 They have been rocking the world with their incredible heavy metal music for more than 50 years. And now Birmingham, England's finest, BLACK SABBATH, are to be spruced up ready to greet a new parade of fans for when the city's Broad Street reopens after lockdown.

Tony Iommi, Ozzy Osbourne, Geezer Butler and Bill Ward, who collectively adorn the "heavy metal" bench on Black Sabbath Bridge, are getting a much-needed "touch-up" to keep them looking good. The distinctive bench, which sits above the canal off Broad Street, was officially opened by Geezer and Tony in June 2019. It has since attracted thousands of BLACK SABBATH fans, and media, from all over the world. But the combination of construction work and the legion of fans making a pilgrimage to have their photo taken with their heroes has taken its toll.

The restoration work includes re-painting the distinctive portraits of Geezer, Tony, Ozzy and Bill, and repairing any scratches or chips. The bench will remain in place on the recently re-named bridge during the clean-up, unlike when it was temporarily removed in October 2019 due to the Metro extension.

Stewart Francis, of Etch Components, who was involved in the original work, has now been commissioned to smarten the bench up. He said: "We are re-dressing all the faces because of the building work that's gone on with the dirt, muck and grease that's gone onto the bench, and people sitting on it. We are re-cleaning it, re-setting it, ready for when Broad Street re-opens."

Francis said the bench was bearing the consequence of people sitting on it and leaning against the four band members to have their photo taken. "It's a victim of its own success," he said. "You get marks where people have rubbed it, put their arms around it, worn jackets that have got zips and things that have scratched into it. It just makes it look a bit shabby, so we like to keep it dressed and looking smart. When it's finished it will all look pristine and how it should be."

Mike Olley, general manager of Westside BID, commissioned the original bench project and wants it to continue to draw tourists to the city. He said: "BLACK SABBATH are arguably Birmingham's most famous band, so it's fitting that they continue to attract fans to the city through this bench. It's lost a bit of its gloss due to all the building work, and the thousands of fans wanting to sit on it, so we are cleaning it up ready for when we can re-open Broad Street's bars, clubs and restaurants."

Watch the video below by Jas Sansi.