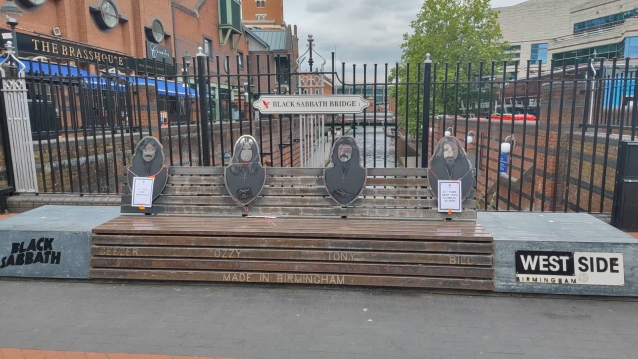 Global debt and climate protesters this week decided to use the famous BLACK SABBATH "heavy metal" bench in Birmingham, England to highlight their campaign.

The activists placed placards around the necks of the metallic images of Geezer Butler and Bill Ward, with the latter reading "G7: TURN DEBT INTO CLIMATE ACTION".

The placards were quickly removed by alert Westside BID staff, but the peaceful protest was acknowledged as "democratic" and thanked for not causing any damage to the bench.

The campaigners, who regularly uses the hashtag #debtforclimate on social media, want developed nations in the west to cancel the debts of so-called third world countries.

Their approach considers "climate debt" to be a debt owed to developing countries for the global damage caused by developed countries’ disproportionately large contribution to climate change.

The protests came as this year's G7 summit of world leaders met at Schloss Elmau, an historic building near Garmisch-Partenkirchen in the Bavarian Alps in Germany.

Mike Olley, general manager of Westside BID, said: "We fully appreciate that the nature of the protest was careful not to cause any damage. However, as custodians of the BLACK SABBATH bench, we had to remove the protest placards. The irony is that BLACK SABBATH themselves were initially a protest band … As a group of proud, working-class blokes, they got annoyed by the 'hippie' culture of peace and love and felt they had to project a more raw and realistic aspect of life — hence heavy metal. But seriously, if you look carefully at some of BLACK SABBATH's song lyrics, you can see that they were deeply mistrustful of world leaders, for instance in their 'War Pigs' song."

Olley added: "Here on Westside we want people to take care of the BLACK SABBATH bench, but, at the same time, we will always welcome democratic, peaceful protests."

The distinctive bench, which sits above the canal off Broad Street, was officially opened by Geezer and Tony Iommi in June 2019. It has since attracted thousands of BLACK SABBATH fans, and media, from all over the world.

The handmade, stainless steel bench was forged in the city by Gateway Steel Fabrications and features images of Ozzy Osbourne, Iommi, Butler and Ward with the words "Geezer. Ozzy. Tony. Bill. Made in Birmingham 1968" etched on it.

BLACK SABBATH super-fan Mohammed Osama came up with the idea and worked closely with Westside BID on the project.