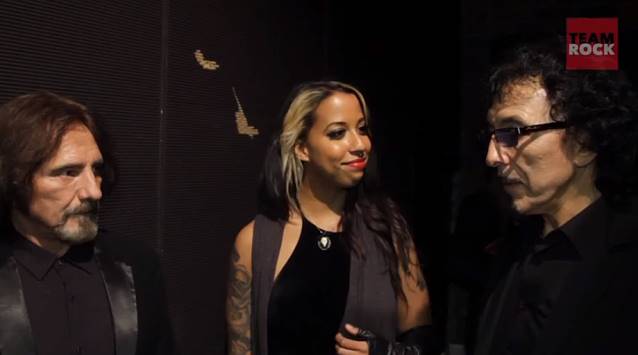 Sophie K of TeamRock Radio conducted a short interview with BLACK SABBATH members Tony Iommi (guitar) and Geezer Butler (bass) at this past Thursday night's (November 14) ninth annual Classic Rock Roll Of Honour, which was held at London, England's Roundhouse. You can now watch the chat below.

BLACK SABBATH won three awards at Thursday night's event: "Album Of The Year" for comeback CD "13", "Event Of The Year" for reaching No. 1 after 43 years, and the previously announced "Living Legends" award.

Singer Ozzy Osbourne said: "I never thought I'd be standing here, what, 45 years later? It's an incredible event for us all. We're still in shock. It's been an incredible year, after I spent all those earlier ones trying to kill myself."

Iommi added: "Thanks for everything. It's great to see all these old and new faces."

BLACK SABBATH will return to North America in 2014 for a series of 10 shows beginning on March 31 in Brooklyn, New York and encompassing mostly Canadian stops until winding down on April 26 in Los Angeles. According to a press release, these gigs will be among the final shows that SABBATH does in support of its current studio album, "13", which became the band's first No. 1 album ever in the U.S. when it was released this past June.

The group has been on the road since last April in support of the record, which reunited Osbourne, Iommi and Butler for their first full-length studio project since 1978's "Never Say Die!"

The band has not indicated whether another studio album is in its future, and Ozzy told The Pulse Of Radio that he was fine with the possibility of "13" being its last one. "For whatever reason, if we don't do another studio album, this is where I would have liked to have been at the end of SABBATH, my days with SABBATH," he said. "But life has a funny way of twisting things around, and if we do do another album, it'd be great, but if we don't, this will be a nice way to round it off."

A contract dispute led original drummer Bill Ward to sit out the reunion, which was also marred by Iommi's cancer diagnosis in early 2012.

SABBATH will release a live album and DVD/Blu-ray captured on this year's world tour, called "Black Sabbath: Live… Gathered In Their Masses", on November 26.

Iommi will receive an Honorary Doctorate of Arts from Coventry University in England next Tuesday (November 19) for his widespread musical influence on the world as the guitarist of BLACK SABBATH.