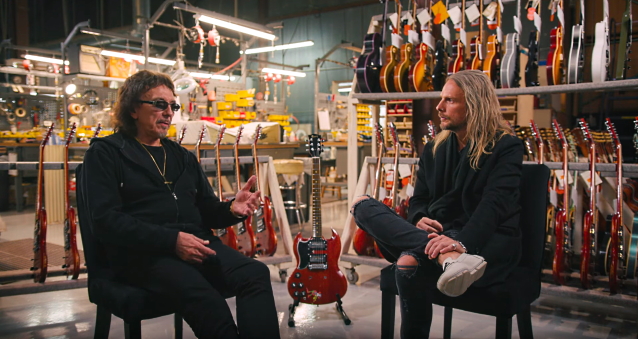 In a brand new original series "The Conversation", Gibson TV gives two artists from similar genres and different generations the chance to sit down and discuss each others journey in the music business.

In the latest episode, JUDAS PRIEST guitarist Richie Faulkner sits down with iconic BLACK SABBATH guitarist Tony Iommi for a one-on-one conversation about early influences, finding their sound as guitar players and a number of tales from the road.

Back in 2018, Faulkner said that BLACK SABBATH's "Paranoid" was one of the five defining heavy metal albums.

Earlier this year, JUDAS PRIEST members Faulkner, Rob Halford and Glenn Tipton commenced the official songwriting sessions for the band's follow-up to "Firepower" album. Released in March 2018, "Firepower" was the second LP to feature the 40-year-old Faulkner, who was selected to fill the void left by founding guitarist K.K. Downing following his exit in 2011.

JUDAS PRIEST will celebrate its 50th anniversary this year with a world tour coming to the U.S. in the fall. Support on the "50 Heavy Metal Years Tour" will come from SABATON.