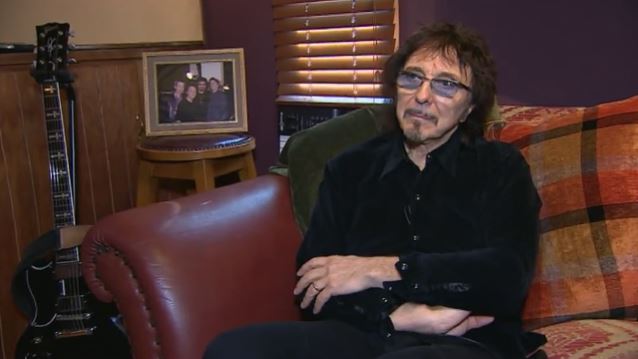 BLACK SABBATH's TONY IOMMI: LEMMY Was 'The Epitome Of Rock And Roll'

BLACK SABBATH guitarist Tony Iommi spoke to BBC Midlands Today about the pasing of iconic MOTÖRHEAD frontman Ian "Lemmy" Kilmister, who died on Monday (December 28) at the age of 70 after a brief struggle with cancer. You can watch the chat below. A few excerpts follow (transcribed by BLABBERMOUTH.NET).

On how he will remember Lemmy:

Tony: "I think Lemmy is the epitome of rock and roll. He's always lived a wild lifestyle. It's the whole thing: sex, drugs and rock and roll. And he really lived that life, and he loved it."

On whether it's true Lemmy drank a bottle of Jack Daniel's whiskey a day:

Tony: "He did. He drank a bottle of Jack Daniel's. On tour… They [MOTÖRHEAD] toured with us many, many times — probably thirty times — over the [years]. And we used to have to do his rider, 'cause they'd have to present their rider to us of what they're gonna eat and drink. And there was never any food; it was always two bottles of Jack Daniel's, two bottles of vodka, a couple of cases of beer. And that was them; that's the way they were. And they didn't pull any punches; people knew how they lived. And they really did live that lifestyle."

On how long he's known Lemmy:

Tony: "Since the early '70s. Maybe even before that. I mean, we met up in a studio in Wales, and he was with HAWKWIND then, I think. And then I hadn't seen him for a while after that. And then we started doing tours together — you know, MOTÖRHEAD and SABBATH — and it happened that every tour we seemed to be doing, MOTÖRHEAD was on it. [Laughs] In all the different incarnations of SABBATH — from the Ozzy [Osbourne] period, Ronnie James Dio, Ian Gillan — it was always MOTÖRHEAD with us. Which was great. I mean, they were really a fun bunch and a really nice gang of… really nice band, you know."

On the possibility of next year's Download festival in the U.K. featuring a tribute to Lemmy:

Tony: "I would certainly hope so. Absolutely. I mean, that guy has done so much for music. He's offered a style that nobody was doing, and he loved every minute… He loved his fans, he loved what he did, and he's always been true to… There was no airs and graces about Lemmy. He lived very modestly. He lived in Los Angeles, off Sunset Strip, in a little flat. He loved it. He wasn't there that often anyway. He was always down a club in Los Angeles called the Rainbow, and he absolutely loved playing on machines, one-arm bandits. And that's what he did. If he was off [the road], most time you'd find Lemmy down at the Rainbow on the machine, absorbed with it. He loved it."

On the sad parallel between Lemmy and Iommi in that Tony is also battling cancer:

Tony: "Yeah, it really is. Every time one of my friends go, and it's that. It's, 'Oh, God!' You don't know how far away you are from it. But you just plod on. And I'm still here. And, unfortunately, he was saying that not long back — that he's still here and all ready to go out and tour. And that's the thing with him. He'll tour even when… When we were on tour, I never saw Lemmy ever cancel a show — except once, when we were in Los Angeles and they were on tour with us. He was that ill that they had to cancel the show. Otherwise, never. And just recently, because he's had to cancel shows, that's unlike him. He would go on when he was, like, really ill, and he has done. And, you know, you've gotta take your hat off to him. He was a real trooper. Absolutely."

Black Sabbath guitarist Tony Iommi pays tribute to his friend Lemmy Kilmister Motörhead! who died today, after being diagnosed with cancer on Boxing Day - Tony heard the news when his bandmate Ozzy Osbourne called him first thing this morning from America.