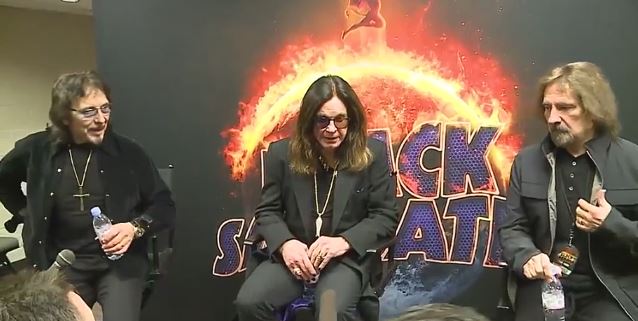 BLACK SABBATH's TONY IOMMI On 'The End' Tour: It's Gonna Be Hard At The End To Suddenly Say, 'That's It'

BLACK SABBATH members Ozzy Osbourne (vocals),Tony Iommi (guitar) and Geezer Butler (bass) spoke to the media in Omaha, Nebraska earlier this week ahead of the kick-off show of the first U.S. leg of the band's "The End" tour. You can now watch the entire question-and-answer session below.

"The End" will start on January 20 in Omaha, ending on February 27 in New York City. Dates in Australia and New Zealand have been confirmed for April, with European festival shows taking place during the summer.

Regarding "The End" being SABBATH's final tour, Iommi said: "It's gonna hard at the end to sort of suddenly say, 'That's it,' but it has to come one day. But we're gonna enjoy it until then."

On the topic of the setlist for "The End" tour, Iommi said: "I think with 'The End' being 'The End' tour, we can't go out and play all of the new album [2013's '13']; they wanna hear some of the classics, you know. So we've dug some of the early ones out that we haven't played for a long time. So we will be playing them." Ozzy added: "We're doing songs in this set which I don't think we've played in 45 years."

BLACK SABBATH recently revealed that it will sell a new limited-edition CD titled "The End" at the shows on its farewell tour. The disc will feature four previously unheard studio tracks left off the band's 2013 reunion album, "13", as well as live versions of four songs from the world tour the band did in support of that disc.

"13", the first SABBATH full-length studio album in 35 years to feature original members Butler, Iommi and Osbourne, also became SABBATH's first No. 1 album in the U.S. when it was released in June 2013. The band abandoned plans for a follow-up after deciding that the upcoming trek would be its last.