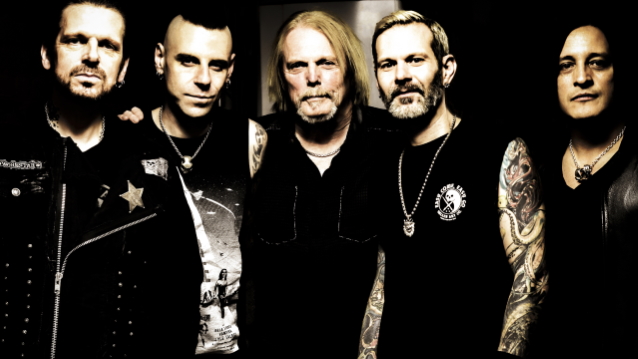 In a new interview with Mark Strigl and John Ostronomy of Talking Metal, BLACK STAR RIDERS frontman Ricky Warwick offered an update on the songwriting sessions for the band's follow-up to 2019's "Another State Of Grace" LP. He said (see video below): "We have written the next BLACK STAR RIDERS album. It's done. It's demoed. We're just waiting for when it's safe that we can all come together and get into the studio, which will be here in L.A. with [producer] Jay Ruston again, and actually record the thing. So I'm hoping this summer we'll be able to get in and get it recorded."

"Another State Of Grace" was recorded at Sphere Studios in Burbank, California in February 2019, and was produced and mixed by Ruston, who has previously worked with STONE SOUR, ANTHRAX and URIAH HEEP, among others.

Gorham formed BLACK STAR RIDERS in 2012 after deciding not to make a new album with the THIN LIZZY name out of respect to late THIN LIZZY frontman Phil Lynott.

Scott joined THIN LIZZY in 1974 and spent a decade on the road with Lynott and the rest of the band.

Born in Newtownards, County Down, Northern Ireland, Ricky now calls Los Angeles home — he's lived there for nearly two decades. Ricky has four kids — his youngest is 12 and his oldest is 23.

Ricky will release a brand new studio solo album, "When Life Was Hard And Fast" — his first since 2015 — on February 19 via Nuclear Blast.