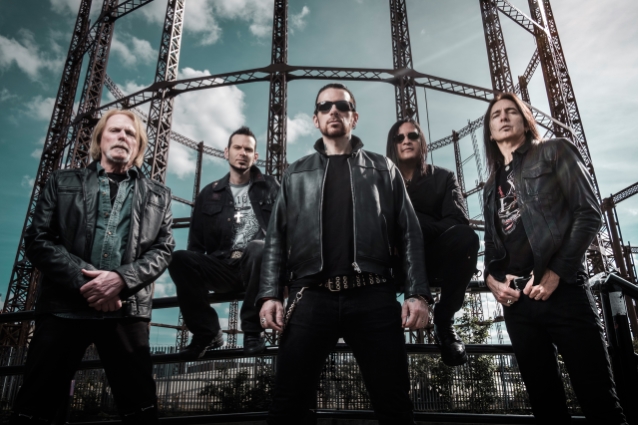 BLACK STAR RIDERS have demoed more than a dozen songs for their fourth studio album, which they will begin recording next month in Los Angeles.

Speaking to Planet Rock ahead of this past weekend's appearance at Planet Rockstock, frontman Ricky Warwick and guitarist Scott Gorham said that the recent addition of guitarist Christian Martucci has re-energized the band.

"We go into the studio in January with the new boy Christian Martucci from STONE SOUR, who we're absolutely delighted to have as part of our family," Ricky said.

"We've already demoed 16 songs, and we start with Jay Ruston producing the album. And we're going to record in L.A. So it's a change all round because obviously we used [producer] Nick Raskulinecz for the last two records, which was great. But just with Damon [Johnson, guitar] leaving and Christian coming in — Jay's mixed the last two BLACK STAR RIDERS albums, so we just thought, 'Let's do the whole thing with Jay in L.A. this time.' Christian's worked with him before in STONE SOUR, so there's a relationship there. So, we're excited."

Johnson announced his exit from BLACK STAR RIDERS in September, but continued performing with the band until the end of the group's U.K. tour on December 3.

Scott added: "We're still friends. We used to say, like when Marco [Mendoza, bass] wanted to fly off, I tell everybody, 'This is not a jail sentence. We do this thing and we have a lot of fun doing it, and then when it's time to go, it's time to go."

Ricky said: "You get to our age, and everybody's situation is different at home, and you've got reasons, and everybody has to adapt to that. Damon wants to go off and work on his solo stuff and spend more time with his family, and we totally respect that and wish him all the best."

Scott continued: "We're on the road all the time. When you've got kids, it gets a little tough."

Last year, BLACK STAR RIDERS inked a new worldwide deal with Nuclear Blast Entertainment, the label that has released all three of the band's albums so far: 2013's "All Hell Breaks Loose", 2015's "The Killer Instinct" and 2017's "Heavy Fire".