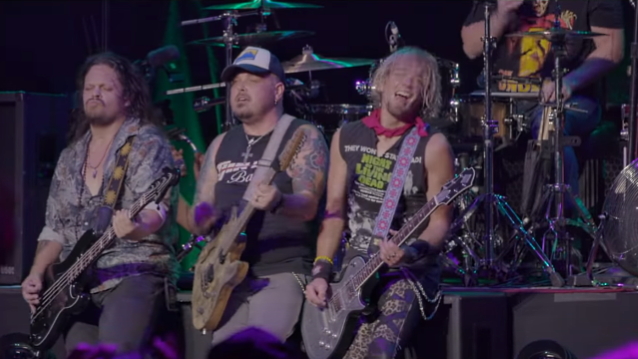 BLACK STONE CHERRY and StagePilot have announced a global livestream event titled "No Ceiling: Celebrating 20 Years Of Black Stone Cherry". The event will present a live performance captured at Nashville's The Skydeck, alongside an in-studio question-and-answer session conducted by longtime friend Lzzy Hale of HALESTORM. Additionally, a never-before-seen acoustic performance with Hale will premiere for this special event.

On Wednesday, December 7, the broadcast world premiere will go live for fans in Europe at 8 p.m. GMT. Additional premieres will follow at 8 p.m. EST and at 8 p.m. PST. After the first day of airing, the program will remain available as video on demand through December 11 at 11:59 p.m. PST.

BLACK STONE CHERRY offers: "On a very chilly night in early April when most people would want to be inside enjoying their drinks, we opted to play on a rooftop in downtown Nashville, Tennessee! With quite literally no ceiling above us, we teamed up with StagePilot to bring you this memorable show, plus some incredible bonus content including interviews with the band and our friend Jared James Nichols, acoustic performances, and a very special Q&A on how the band got started and where we’re headed, hosted by our dear friend Lzzy Hale! A celebration of BLACK STONE CHERRY that we know any Cherry Head will absolutely love!"

Lzzy shares: "It was an honor to celebrate BLACK STONE CHERRY's twentieth anniversary with the boys! I had a blast taking them down memory lane, and, of course, getting to perform a special acoustic version of 'Peace is Free' with them. It's been a pleasure to call these talented men family! Here's to the next two decades!"

Last month, BLACK STONE CHERRY drummer John Fred Young told Loud TV about the progress of the songwriting and recording sessions for the follow-up to 2020's "The Human Condition" album: "We started working on the new record this summer. And we've got about… I think there's about eight songs right now that we had done, and we're gonna go back in in December and finish up the rest. So [it's] a really, really cool situation.

"We've got our own theater back in Glasgow, Kentucky, where Ben [Wells, guitar] lives. We do our home shows there; we do it every two years at Christmas. So we recorded the drums in this big, beautiful theater. And they just sound incredible; even with me playing, they sound incredible. And we're going to my house to do vocals and guitars. So, [it's] really cool, man. I think people will really love the songs and the playing.

"We recorded 'The Human Condition' in 2020, and when we were doing that, everything with COVID, it was really starting to rise up," John added. "And we got done with that record two days before our state locked us down. So we were lucky to get that done. It's wild because we're just now playing that record throughout Europe. But I think probably next year, early next year, we'll have a new record out."

As for the musical and lyrical direction of the new BLACK STONE CHERRY material, John said: "The first seven or eight [songs] we had done are really… The lyrics on them are very heartfelt and great. The music is really heavy, but also there's the BLACK STONE CHERRY ballad or two, so… I can't give away too much [laughs], 'cause I don't even know what the other ones sound like yet, 'cause we haven't really finished those."

This past August, BLACK STONE CHERRY vocalist Chris Robertson told "Rock Of Nations With Dave Kinchen & Shane McEachern" about the band's upcoming LP: "We've got nine songs completely written and about seven more that we've gotta write lyrics and stuff to. But we've been at it, man. And it's good. It's heavy. It's melodic. I think it's gonna be a great record."

Regarding the lyrical inspiration for BLACK STONE CHERRY's new songs, Chris said: "It's crazy because the songs we write… Obviously we write songs that are fun — like 'Blame It On The Boom Boom' and 'White Trash Millionaire' — a lot of fun stuff, but we also write some more serious songs.

"It's different, man," he continued. "We've been writing and stuff. And it's crazy. For me right now, the stuff that's kind of coming out is a lot related to my dad passing, a lot of understanding how to deal with this loss and grief and just learning to live through it.

"The serious songs we write are stuff that we've either witnessed or we've lived or whatever," Chris explained. "Other than a song like 'Rain Wizard' or some of the stuff we wrote that was more folklory, everything we've written is something we've lived. So there's a hell of a lot in the well now. I went a really long way of saying that, but the well is very deep now of things to write about."